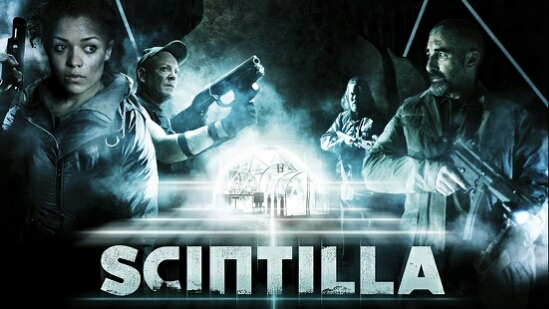 An elite team of mercenaries is hired for a covert operation, deep inside a former Soviet state. Arriving at an underground laboratory, their mission is to secure specimens of genetically engineered human and alien hybrids. Battling with a ferocious armed militia as well as dark, menacing creatures, the odds of survival are stacked against them.

Mutants in a bunker, what could possibly go wrong!?

This unique brit flick, directed by Bill O’Brien who is not shy when it comes to cross breeding alien species or using John Lynch to deal with them, brings together an seemly unplanned trilogy Isolation (2005) Ferocious Planet (2011) and now Scintilla (2014) . The mercenaries are led by Powell (Lynch), have to infiltrate a bunker and bring back mutant samples from deep inside a war torn Russia.

The film is well acted but lacking in excitement, there is little expansion in some of the stranger aspects, such as why is Powel being tortured at the beginning of the film, the mutant hand that opens a door near the end, probably aimed at getting the film needs talking about sequels. The unique selling point are the two unique mutants test subjects,  I’ve never seen anything like them before. If you’re into raincoats and retro fashion, Dr. Irvine (Winslet) delivers the goods. It’s interesting to say the least, probably a little too subtle, there is a great story to be told here it just needed a bit more depth to wet the whistle.