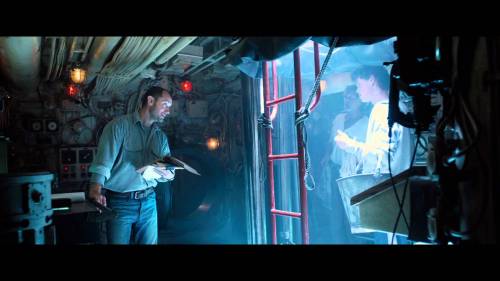 Divided by language a disgruntled British and Russian submarine crew lead by an abrasive Aberdeen enhanced Fraser (Jude Law) are flooded into the depths of mystery, greed and paranoia in this dark tense thriller. Filled with intense confrontations, daredevil underwater performances. Black Sea offers an unforgettable voyage. Starting out slow-paced as Fraser (Law) is discarded by his employer, he stumbles upon an almost perfect plan to recover missing Nazi gold after a meeting with an old friend Kurston (Daniel Ryan) he is soon meeting with executives and commandeering an old rust bucket “whore” of a submarine to take him and his new crew to the bottom of the black sea to pirate the abandoned gold. Early on he meets a strange young man Liam (Karl Davies) who informs him that Kurston has committed suicide, and the boy is asked to take his place and is a constant source of amusement for the rest of the crew. Once the men are below decks the insanity and paranoia starts wafting around in the darkness. The claustrophobia beings to steep as the story and plot accelerate. The minimal soundtrack twinned with the darkness of the submerged vessel draws the film into proper submarine territory with only minimal sonar bleeping, and looking more like a craft than a sub, all of this is cast aside once the crew are worked up and the strangeness occurs. High on the prospects of becoming millionaires and realising the booty will need to be divided it soon becomes every man for himself and no man is safe. Kevin MacDonald’s work is generally outstanding and only rarely does he let himself down, primarily the Eagle (2011) comes to mind, but rising from this black sea epic, I can see him back on track for better things and able to deliver the goods once again. Pushing his cast to their full potential, both new and seasoned actors such as David Threlfall, it seems to have taken time out to sculpt the actors outside of their typecast/stereotypes. Jude Law’s Scottish accent does help enhance his character giving him more kudos. Taking the sweaty rawness of Das Boot (1981) and melding it with the strong modern edge of Hunt for Red October (1990), Black sea actually ends up as a western style showdown on a sub. Overall the murder and intrigue that the film has to offer will keep the ploy fresh until the end. Sub movies are an exclusive genre that have produced some of the finest cinema to date, Black sea doesn’t let the genre down, providing a new shady edge and strangely manages to successful combine a large amount of mystery to the confines of a small stage. Hopefully this will open up the doors on what can be achieved when you apply a good story to any setting. I wouldn’t expect anything like the current zombie revival that seems to be going on forever but hopefully there will be some more genuinely good sub movies inspired by this new chapter.