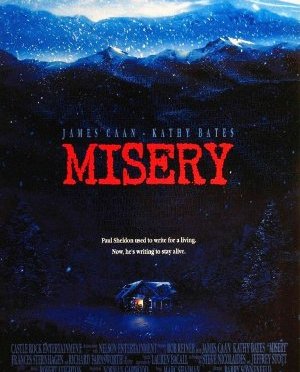 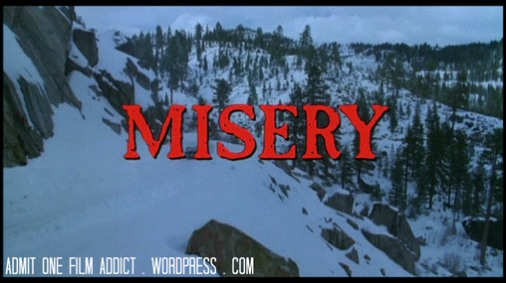 Synopsis : Paul Sheldon, a successful novelist, is rescued after a snow storm by his “Number One Fan” and must rewrite his latest novel to her liking in order to stay alive.

TAGLINE : The Tide has Come

Skillfully adapted from a much loved Stephen King novel of the same name, Misery is a well crafted, superbly acted charismatic tales of a writer Paul Sheldon (James Caan) is held captive after a car crash by a former nurse Annie Wliks (Kathy Bates). During their time together the broken and vulnerable  writer has to fight for his survival against a bi polar, suicidal, politely aggressive OCD psychopath.

The film is a total marvel, the characters are so unique and well developed, there is a display of amazing  from the small cast of 5 main actors. Caan is unusually nice, as he spends most of the film doped up, in pain or just plain scared. There is a grizzled sheriff played by Farnsworth who was a nice addition  as the character wasn’t in the original book, the scenes of him and his “Deputy” are very memorable. 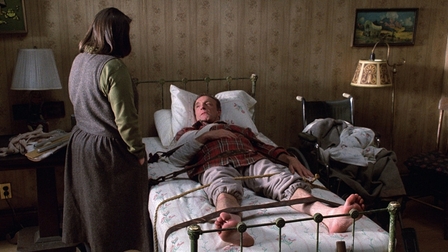 There is evidence of a firm hand and great direction from Rob Reiner, as his second Stephen King adaptation the film has a more claustrophobic yet homely atmosphere than his previous Stand by Me (1986). In his captors quaint cottage hideaway the unlucky writer is forced to face his fears and Wilks’s  inner demons. Between the strange violent outbursts he manages to  befriend her, uncover her dark past, write a novel and forge various escape plans to the setting of a romantic Liberace soundtrack.

Stephen King has a lot of rolling themes with his work, after suffering a car crash himself and writing through his recovery you can understand the personal fears that would have cropped up in such a vivid mind. Misery is one of the direct influences of such an event. Often we think of the recovery process and horrors that might occur in the real world, but chucking in a  plump nurse and a snowy setting suddenly the fears a magnified beyond all belief. 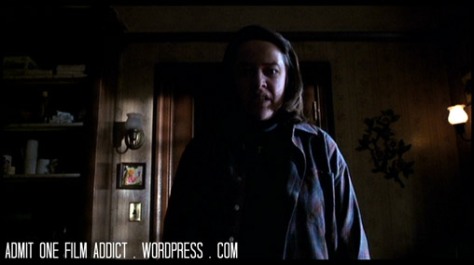 Misery is infused with lots of sarcastic dark humor and the detailed character development causes some hauntingly realistic scenarios. It’s a horror story in both the visual sense and in a psychological approach. Attempts are made to understand Annies broken mind. The interactions between the two lead actors is magical, the contrast of the powerful male figure being crippled and forced into a submissive role could be questionable. There is also a healthy relationship between two other characters the sheriff and deputy, a couple who in contrast have a mutual love (with some added spice), whereas Annie and Paul have a slightly different relationship, and it does happen, in the broad strokes a relationship is forged between them, not a nice one, but they soon start to learn eachothers character through their crazy situation. 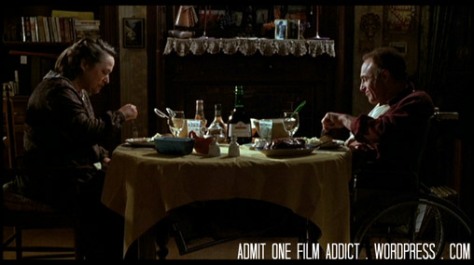 This is what true horror is about, without huge special effects and with no visible monsters, the fear factor of this movie are the inner demons and what the extent of one human beings twisted mind. Contrasted with a lovely warm home, floral wallpaper and a cardigan crusader nurse,  it puts you out of your comfort zone,  there are some crazy torture scenes, amplified but a change in the weather might i add, but there is no dungeon,  simply a laura ashley bedroom and jello afterwards.

V: It’s hard to find fault with this movie, the atmosphere, candid scenes, music, drama and action are all fantastic. It’s a great story and the actors really make an example of what acting should be about. I suppose some bods out there have found some goofs here and there but it’s nothing major and doesn’t distract from the film at all . It’s a golden example of what tense thrillers should be like. A well deserved Oscar for Kathy Bates.

BS: I adore the opening scene when Paul is leaving the Cabin and he’s driving through the snow listening to Shotgun by Junior Walker and the all stars,  then the big red letters of MISERY get splayed across the screen. Similar adaptations of this appear in Funny Games  1997) and Cabin in the Woods (2012).

TIL : Never trust a nurse. Never go driving in a blizzard and Never piss off your No.1 Fan.

DGI : Your allowed x10 drinks one for every bone broken and some champagne for the dinner scene!