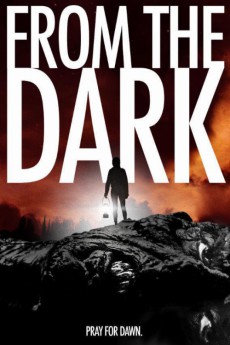 Setting the scene by feauting an elderly man desperately trying to bury a body in a peat bog, the soil starts to move, there is a scream and a struggle, cutscene and a young couple make their way through the beautiful Irish countryside bickering over marriage ( I hasten to add that I totally agree with the definition of love and marriage in this conversation). The car breaks down and help is sought in a quiet village down the road. Then things start to get very strange.

Director Connor MacMahon has been slowly ploughing through all the different types of movie monsters in his films and while the actual monsters origins and species isn’t fully explored within the movie it’s easily categorised as a Vampire, looking and acting most like  Nosferatu (1922).  The film boasts an extremely small cast of 4, but doesn’t lack on suspense and thrills, while trudging through at a slow pace.

Being afraid of the dark is quite a natural thing for most of us, having a calculating psychotic monster with a blood lust stalking you doesn’t ease the fear. From the Dark explores all of those creepy moments in the quiet darkness.

After the couple make it into an abandoned cottage with the monster hot on their heels they soon work out that light is their own saviour. Being in strange surroundings and with one of them injured it becomes a tricky fight for survival. After Mark (Stephen Cromwell) is mauled by the beast his immobility leads Sarah (Niham Algar) to take the lead in fighting and getting them both to safety. The bickering couple soon have only each other to hang onto and love is no longer in the question, in a similar vein as Hush (2008) they find a much stronger bond to overcome any troubles they once had.

With the hungry creature stalking them  at at all times and trying to work out it’s strengths and weaknesses while protecting Mark, the quick witted and extremely brave Sarah becomes resourceful in her search for light and weapons. Unlike other thrillers like Storm Watch (2007) where Nadia Fares suddenly turns into Macgyver when the shit hits the fan, Sarah’s attempts are much more grounded and realistic. The creature is kept out of sight for most of the movie but it is very apparent that its fast, violent and likes to dwell in the darkness.

The film is high tension and full of jump-scares as well as playing on various phobias, a creepy spider scene as well as some claustrophobic moments, much like the survival horror video game series Alone in the Dark. The effects are very simple, there is little CGI if any, everything is left up to great acting intelligent creature effects. the downside is the lack of varying scenes. the film does lull in the middle, there are only so many times Sarah can run freely around in the darkness with this killer beast always missing her before the mind wonders how long until the end. Things do pick up though, and the ending is quite dramatic and makes up for any earlier shortcomings.

There is a decent slice of gore in between the running around in the dark, a brutal amputation scene and very little dialogue towards the end. It’s a great attempt for a horror movie with an obvious low budget. It makes the best of what it available and dare i suggest that it has a Hammereque style to it. I would imagine something like this coming from the Hammer Horror revival.

It is simple and does revert back to the basics of the horror genre, but its flare is in the wild thrills of the chase the bravery against the unknown. It’s an interesting change to the style of horror that is being produced in modern times, it’s not relying on buckets of gore and huge effects but is an actual horror movie and unashamedly nothing else. I would like to see more modern films taking this on board, as well as future movies from MacMahon.

It won’t grasp a lot of cinema fans as it doesn’t have a classic ending, it’s on the quiet side, more could have been done with sound track in all fairness. There are some moments which people will want to see the gore but it’s not shown. But for me it’s breath of fresh air into my much loved genre.

A couple on a trip through the Irish countryside find themselves hunted by a creature who only attacks at night. Back to basics horror that reinforces our primal fear of the dark.

V: It’s a good film, but with it’s quiet nature and lack of effects it won’t win over too many hearts. Once the mechanics are in place it’s quite interesting with a few screams and shocks in this bitter sweet love story in a dark and horrible chase until dawn. I admire the fact that a lot of the graphical horror scenes are left for the imagination but I also would like to have seen some intelligent use of lower budget creature effects too add a bit of character and oomph. Still an all round good movie it just needed a little tidying up around the edges.