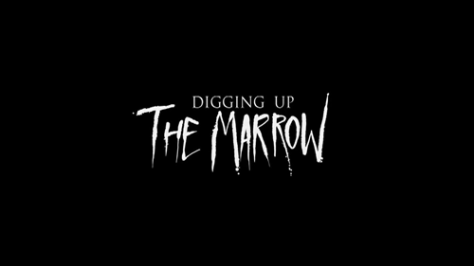 Synopsis: A documentary exploring genre based monster art takes an odd turn when the filmmakers are contacted by a man who claims he can prove that monsters are indeed real

An excellent mockumentary for horror fans who were starting to lose faith in real monsters. Written and directed by Adam Green the creator of a outlandish diverse range of horror movies including Frozen (2010), the Hatchet (2006) franchise and Chillerama (2011), tries his hands at something a little different again. Adam does credit himself as being a fan of horror and insists that he makes horror movies for real fans of the genre.

Digging up the Marrow concentrates on Green as a presenter of a documentary prepared to investigate claims that monsters are real, after receiving a case file from the mysterious and often aloof William Dekker (Ray Wise actor involved in Robocop, Dead End, Jeepers Creepers 2). The team then embark on finding the entrance and inhabitants of an underground world that Dekker has named The Marrow, a sort of reject town for deformed children and circus runaways. This reeks of Clive Barkers Nightbreed (1990)but it tries to latch on to reality more but with a similar style of monsters. (Dekker/Decker- Nightbreed.. a homage to the movie maybe?)

It’s great to see Green work alongside some familiar faces, regularly working with similar people and must have called in a lot of additional favors, getting some marvelous cameos from Mike Garris (director of Sleepwalkers, Critters 2 and Fly 2) and Kane Hodder (who worked with Adam through all the Hatchet Series) to mention only a few.

Adams enthusiasm is rampant throughout this fast paced movie, although I am still a little bit bemused as to what he was trying to achieve. The movie seems to want to prove that monsters exist but the plot phases in and out. During the movie the evidence is shown that monsters are real, explanations are given but no real evidence is captured, then when something is captured it’s soon discredited and it sits on the fences through this to and fro of belief of non-belief. It’s interesting to watch this happen. Watching Green getting more driven for the truth and freaking out in the woods.

I really did enjoy the movie and Green does manage to prove a few things, he can really put his hand to any style of horror and make a great movie, he can act, despite acting as himself he really manages to bring in his own quips of humour and dicking around while making it all seem very real, albeit in a awkward manner, he’s likable and his wholehearted determination and enthusiasm comes across on form. And finally my favourite aspect, there is none or very little CGI. These monsters are physical creepy beings, there is such a big improvement in any horror movie when there is more practical special effects, Army of Darkness (1992) is a true testament of this.

While bringing a little extra to the found footage genre. Digging up the Marrow doesn’t feel like a complete movie, but more of a side project while Green worked on other projects. Much like the characters in the marrow it does feel a little bit rejected. It’s still worth attention. There are a lot of weaker found footage movies out there which are taking up shelf space. This does deliver, maybe not quiet what you’d expect but that’s what makes it great.

I suppose in Greens young career it’s worth getting the audience back into believing in things that go bump in the night. Have we really grown up so much that monsters have lost their magic? Digging up the Marrow, I think, tries to make us believe in and fear the dark again.