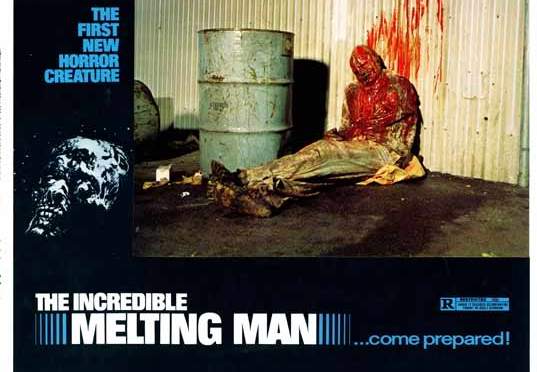 At first I was put off by the title and due to the era of the movie I was expecting some possible comedy cheese thrown into a mindless movie. I was very wrong. While the movie is low budget the effects are quite adequate for the what is required and the film is quite brilliant. Obviously this is coming from a gore loving horror fan who appreciate good/bad movies, so bare with me.

The main character Steve (Alex Rebar) is an ill fated astronaut in this gross and trashy Z production camp horror flick, there is a fair share of nudity and lots of slime and body parts. After Steve West returns from space, he is highly radioactive and starts to melt, after seeing his floor pizza visage he breaks out of hospital and goes on the run, freaking out many a naked couple and a great old crazy couple along the way, as his need for human flesh starts to consume him.

It’s repulsive and if you’re able to switch off your brain (nothing is really explained, it just happens because movie) and ignore the retarded script, there is a lot to enjoy in this movie.

Parts of it remind me of the ridiculous nature of Motel Hell (1980). The film gets darker and more desperate as Steve develops into this melting mess of a creature.can he ever be rescued, is there a cure for this bizarre “disease”? The ending blew me away, it seemed distant from the rest of the film. Thoroughly good film though.