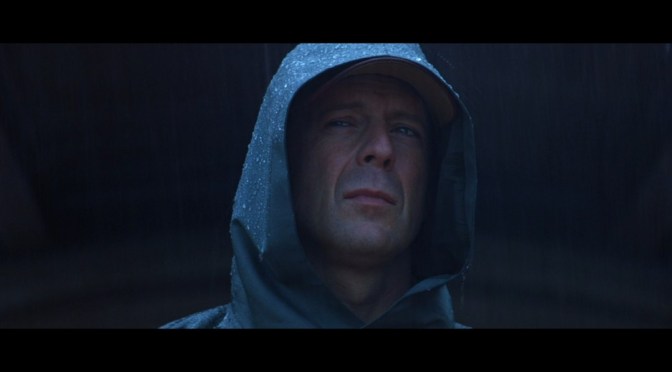 One of the good N Might movies that I missed as I had given up as his films all had a similar formula but then went back when the films got really bad and it was made before he slipped down that slippery route.

Price (Samuel L Jackson) is a fragile little snowflake who loves comics, and spent his life searching for someone who he believed to be his total opposite Mr Unbreakable and he find such a man in David Dunn(Bruce Willis) who has recently survived a train crash that killed everyone else on board. So Price is now convinced and tries to convince David  and his family that he does have super hero powers…

I don’t know if I watched it too late, but it just didn’t do a lot for me, it’s a brilliant concept and one that we really need to pay attention to because we need more people to realise what hero’s really are, and that we can’t rely on radioactive spiders to bite people who will in turn save the world, because lets face it, it ain’t gonna happen.

Samuel L Jackson is very poetic in his detailing of information, Willis is and always will be John McClane and is the perfect candidate as a (super)human hero, he’s supported by a talented cast including Robyn Wright (Mrs Dunn)  and  Spencer Treat Clark (Master Dunn)  and all appear in one of the most intense scenes in the movie where Treat tries to prove to his father that he’s invincible and there is a pants wetting stand off in the kitchen where he points a gun at his dad and his parents try to talk him out of proving that particular point…it’s gripping.

M Night appears in a small role that confused a bunch of people, there is an “mind blowing” twist at the end but not one his best. a bit of action but mostly the film is padded out with Samuel L trying to convince Willis that he’s amazing and lets face it when Sammy L Tells you something, you pay attention. For the budget i would have liked a little less chat and bit more OMG he can do amazing things, but it wasn’t explored and the moment was lost.  Still it’s a fairly entertaining movie, just nothing I’d ever want to watch again.