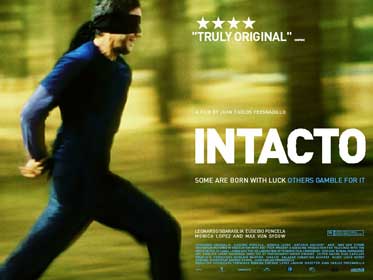 This gripping and very surreal drama is thought provoking and entertaining, there have been many books written about luck and how it can be manifested using charms and striking bargains but director/ writer Juan Carlos Fresnadillo had amazing fun playing around the the idea of an underground group who trade in luck.

A casino owner and head of this luck cartel, Samuel Berg (Max von Sydow) is amazingly lucky, not only did he survive a concentration camp but he constantly wins at his favourite game of Russian Roulette. His prized worker is Federico (Eusebio Poncela) a man who has the ability to steal people’s luck and is often dispatched to keep the odds in the favour of the casino. After a disagreement the two fall out and Samuel steals all of Federico’s luck and discards him, Federico then set’s out to find the luckiest man alive, a recent plane crash survivor in order to get enough luck to return and beat Samuel at his favourite game. He and Tomas (Leonardo Sbaraglia) to have to go through many trials to increase and prove the levels of luck in order to win the right to play the game. END_OF_DOCUMENT_TOKEN_TO_BE_REPLACED