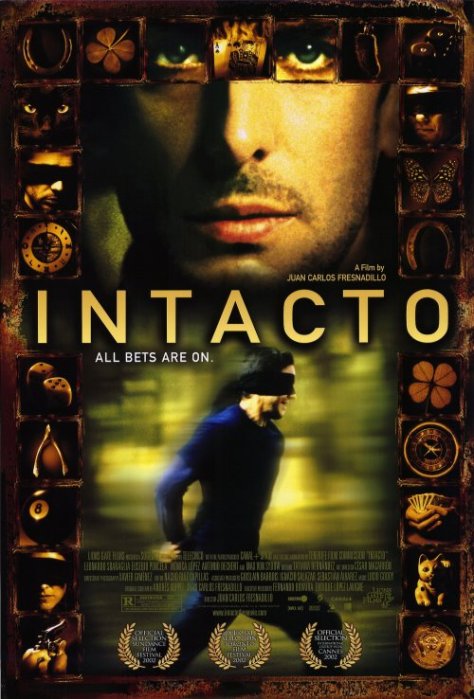 This gripping and very surreal drama is thought provoking and entertaining, there have been many books written about luck and how it can be manifested using charms and striking bargains but director/ writer Juan Carlos Fresnadillo had amazing fun playing around the the idea of an underground group who trade in luck.

A casino owner and head of this luck cartel, Samuel Berg (Max von Sydow) is amazingly lucky, not only did he survive a concentration camp but he constantly wins at his favourite game of Russian Roulette. His prized worker is Federico (Eusebio Poncela) a man who has the ability to steal people’s luck and is often dispatched to keep the odds in the favour of the casino. After a disagreement the two fall out and Samuel steals all of Federico’s luck and discards him, Federico then set’s out to find the luckiest man alive, a recent plane crash survivor in order to get enough luck to return and beat Samuel at his favourite game. He and Tomas (Leonardo Sbaraglia) to have to go through many trials to increase and prove the levels of luck in order to win the right to play the game.

Immediately the beginning of this film is genius, there are beautiful scenes of the casino and the secret rooms where Samuel plays his games are lush and plastered in very vibrant rich colours. As we follow Federico and Tomas we’re introduced to a host of very bizarre characters and scenarios, some enhanced by an intelligent use of CG, there is a bizarre game where the group has their hair covered in molasses and a large glowing insect it released, the lucky person attracts the bug.  Other games are not so tame and are just as dangerous at the goal, and take the bizarre duo all across spain, from a blindfolded running trail in the forest and out into the barren deserts, they have to work hard to this “prestigious opportunity”.

There is the addition of a romance between Tomas and his lover who is searching for him while he goes through these trials and there is a determined cop after him also, Sara (Monica Lopez) who is also taking part in these games to uncover this abnormal world. She is quite a strong presence on the screen and gives a very convincing performance.

In a similar spirit to any movie that’s based on illegal roulette games such as black and white gem 13 Tzameti (2005)  or even Deer Hunter (1978) there is always a peculiar culture that surrounds this deadly game, all human senses are thrown out of the window and we’re presented with a whole new score card. A lot of this film is hard to take in, just purely because the rules are so fragile.

There is something very authentic about these characters, even if the situations are little far fetched and uncomfortable, the pursuit of money and revenge can drive people to do some unreal things. A lot of the challenges, while being weird add in the action into this thrilling drama.

It is thought provoking and raises a few questions, how do you know you’re the luckiest (wo)man alive? surviving a plane crash is one (pretty major) accomplishment but could there be someone luckier and how could you measure it?? I have to admit that there were a few scenes I didn’t get the first time around as I was having trouble with the mechanics but I got there in the end and it was quite enjoyable to re watch and it’s a gripping mystery with some great acting and has a lot of charm and feeds the imagination.