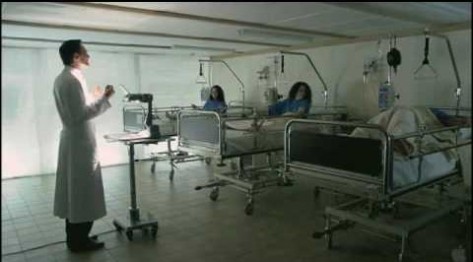 One of those films that lowered the benchmark on gory horrors for another generation. Initially coming from a random pub conversation about the best sentence for pedophile a deranged fetish style story emerges and influenced a whole new style of grotesque lab horror.

A couple of American girls get lost on the way to a party in Germany, while attempting to find help, they are entrapped in the makeshift basement laboratory of an unbalanced retired surgeon, who used to specialise in separating twins but now has a kink for joining bodies together. After practicing on his dogs the doctor now want to have his own personal human centipede and combine the girls to another captive by their gastric system.

After the girls are captured by the theatrical surgeon Dr Heiter (Dieter Laser) they are soon attacked mouth to ass with a Japanese guy acted by Akihiro Kitamura  and the life of a centipede begins. The film take a funny turn as the only talking is primarily between Dr Heiter who sometimes rambles on in German and Kitamura who only speaks in Japanese.

Hearing about the Human Centipede and imagining the concept was actually more damaging that the movie, in fact this film is pretty tame when compared to other revolting films like Salo 120 days of sodom (1975) or even something as commercial as Hostel (2005). But it’s such a unique idea that the concept will stay with you for days even if the film was a little sparse on the gore that we were all expecting.

It’s well filmed and with a small cast it doesn’t need much in the way of effects to drum the message home, what is shocking is the lack of scat, it has left a few people dumbstruck, and at times I was left mouthing “What did I just see”, it’s not overly shocking but the concept is nicely twisted. A great introduction to a horror trilogy that will never be forgotten, it’s disturbing but not graphically so, you have to fill in those pieces yourself you sick puppy! it lays the foundations and explains the mechanics of a terrifying new play thing.