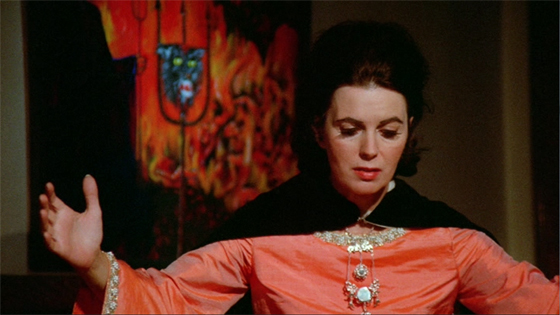 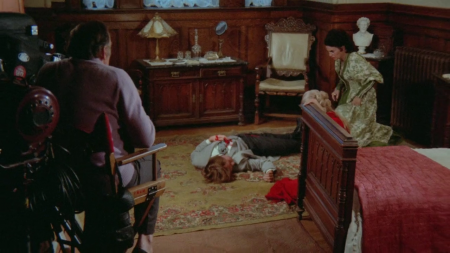 A low budget and often overlooked horror, all surrounding a creepy old house that is being used to film a horror movie, what could go wrong? Fortunately the director (John Ireland) courts disaster by filming his horror movie in a real haunted house and one of the corpses are missing.

The film starts out quite creepy with an introduction to huge house with it’s on tombstone in the garden and a quirky caretaker Edgar Price played by the ever charismatic John Carradine who tries his best to warn the cast and crew about the occult horrors that have already occurred in the doomed house but he’s just passed off as being crazy.

The acting is dismal but with these low budget horrors it’s often a part of the charm, the most experienced actor would probably be the grouchy caretaker, crafted by Carradine. It’s actually a beautiful house and reminiscent of many a Hammer House of Horror classic or even something like House on Haunted Hill (1959). The crew bumble about the house with little faith in the production of the film and recoiling at the wrath of the aging leading lady Gayle Dorian (Faith Domergue) the fluff which makes up this middle section of the film seems to have forgotten that’s a horror movie as it starts to develop into a melodrama.

A return to the classic gothic ghostly haunted house that was once made great y Hammer film, only a little shabby around the edges but still a gem that shouldn’t be forgotten

Eventually one of the crew stumbles upon real occult books in the library and incorporates the readings into the occult ritual scenes in the movie and strange things start to happen, sadly the unravelling of the “mystery” and the presence of the ghoul all ploughs in at the end, I for one was not really expecting one of the crew/cast to be linked in with the house, if this was made clear it would have been as awesome as The Beast Must Die (1974).

Despite losing the direction the film is pretty entertaining, I’m not sure why I really enjoy it so much, the cheese or the jibes at the leading lady who’s basically called a gold digging whore in one scene and threatened to be left on a street corner, I almost forget that it’s a horror film, but there are a few chills and thrills to be had, basically it’s just a bit of harmless creepy fun (how many times have I said creepy?) and should still be cherished due the atmosphere and the story that you might have to dig deep to find, it arrived at the end of the hammer horror reign of terror, it’s early 70’s and things were stepping from these golden years into the gore filled 80’s, this film simply endeavors to give us a final dose of mansions, capes and black magic, Undoubtedly one for the old nostalgia fans.