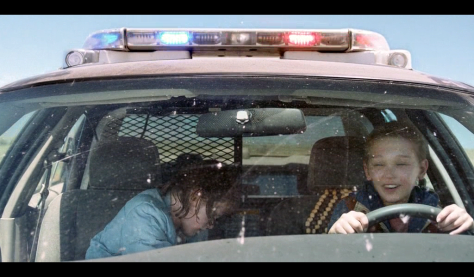 It took a while for this film to grow on me, and it grew a lot, from a 5 to a 7 at least and maybe more. It was a last ditch at the cinema and I just wasn’t prepared.

It starts out as obvious as the two child leads who have run away from home and are traversing the barren landscape of middle America until they find an abandoned cop car parked in a glen, first the kids are spooked by the bizarre occurrence then, as two well meaning but curious kids would, they get in and take it for a spin. Just watching them trying to put the car into gear could have been a comedy sketch itself but Travis (Freedson Jackson) and Harrison (Hays Wellford) have a long journey ahead of them once the owner, a corrupt and psychotic cop (Kevin Bacon) realises his car and it’s cargo have been stolen, while he’s been taking care of some grotty business. Meanwhile the plucky duo are experimenting with all the goodies in the back of the car including guns, rifles, stab vests and a defibrillator, even if your not a parent these scene will make you cringe. The drama intensifies when Bacon starts hunting down the perpetrators who he realises are young boys and flexes some adult muscle and the shit hits the fan when a mysterious cargo is revealed.

The youngster duo were both very competent, and with such a small cast every element has to be on form, which it is, Kevin Bacon isn’t new to being the bad guy when young boys are involved but the violence here is very different, the boys almost take eachother out and then the violence is directed between two adults and witnessed by the boys who then eventually get involved, but nothing as sexual this time Sleepers (1996) was enough. 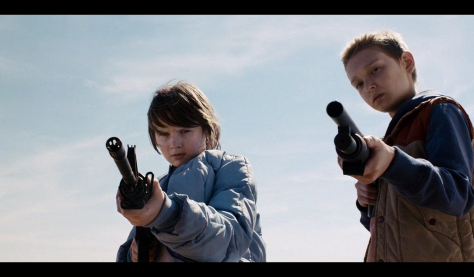 Sprawling landscapes fade into the dusky afternoon as everyone in this movie gets a sudden reality check and a lesson in growing up. It’s almost heartbreaking seeing the boys trying to fend for themselves with such big psychotic people around them, as their adventure turns murky. The film does’t really have any huge major scenes but by the end you find yourself exhausted from the constant flow of compelling drama that intensify into an area that which will gut punch any parent.

Some people are going to find it slow and dull, but I really got into it and I do wonder if there will be a sequel? It’s never really clear what the movie is trying to say, the immediate after effect is blank, “is that it” but so much happens in this minimalist flick, we get enough detail to work things out, Kevin Bacon’s moustach is equally scary and intimating. In the end it’s the simple brute force that people will remember where two young boys have to act like adults way before they are ready.