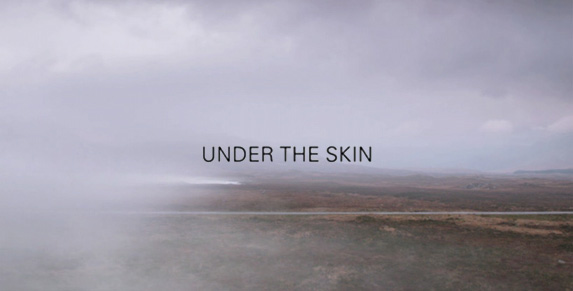 I had been meaning to watch this elusive movie for some time, after reading a few blinding reviews and watching very short trailers only I was besotted, this is the kind of cinema I live for so I was really saving it for a quiet time when i could actually put everything on hold and get into it and I was amazed by every second of it, what I wasn’t expecting, was the disturbing feeling that it left me with afterwards, strangely this affected me more than any other alien invasion movie (apart from War of the World’s 1953).

Starting with a “dead” girl being stripped of her clothes with the backdrop of partial words being spoken by a feminine voice The Woman dresses herself and embarks on an extraordinary story. Travelling through Scotland in a panel van she picks up random men and takes them to a derelict house and while seducing them submerges them in a bizarre black liquid substance, where they are suspended. Day and night The Woman drives around people watching, asking for directions and looking lost to entice men into her lair, while some unknown guardians on motorbikes seem to work around her. Acting like a doped up Frankenhooker she’s polite but ultimately her unscripted conversations often end up in her asking the next victim if they think she’s pretty. After picking up a physically deformed man who she allows to escape from the inky black cocoon, she seems less spatially aware, even more distant and tries living the simple life, eating is a problem for her and after meeting a stranger on the bus her life becomes threatened and things escalate to a violent and disturbing ending.

Do you think I’m pretty?

Filled with constant absorbing imagery and dreamy landscapes this perfectly acted and strangely arranged movie speaks volumes on a range of social and deeply personal psychological matters, from immigration, misogyny and so on. Scarlett manages to make her naked debut so tame and artistic that I think a lot of punters felt let down (congratulations luv), and due to the minimal script, the body does become very important in this film. During each “burial” scene, she brings the victim to the house and suddenly they appear in a large black room, she starts to strip (a little more each time) while backing away and they follow her naked but sink into this magical blackness, in one scene you see her walking overhead heading back out to repeat the process. This setting, this tragic scenario is strangely disturbing.

Jonathan Glazer was incredibly precise while casting and making this skeletal movie, he was very specific on casting Adam Pearson in the film and even after he broke his leg, things were arranged around him, the street scenes were all real footage and few of the people approached were actors, and were told after filming the scene. The mixture of “live” action and acting blend seamlessly among the backdrop of middle of nowhere Scotland, from the city centre to the misty mountains and deep forests, this alien puzzled over… well over what I don’t think we’ll ever really know. It’s always interesting to see someone trying to explain what an alien would do if they came down to earth, usually the intent is war, study, abduction etc, but it’s something we can understand, but Under The Skin manages to introduce us to an alien and an alien concept that I don’t think we’re supposed to understand and isn’t that how it’s supposed to be?

Despite being science fiction and drama and horror and a very mysterious thriller, the film never fails to be beautiful, abstract at times but always fascinating, keeping your attention because you couldn’t possibly imagine what’s coming next.

There are so many questions and so few answers, it’s easy to get caught up in the film’s aesthetic beauty. The strange off kilter approach to storytelling makes the film daring and intriguing. This exciting and intelligent film will certainly get under your skin.