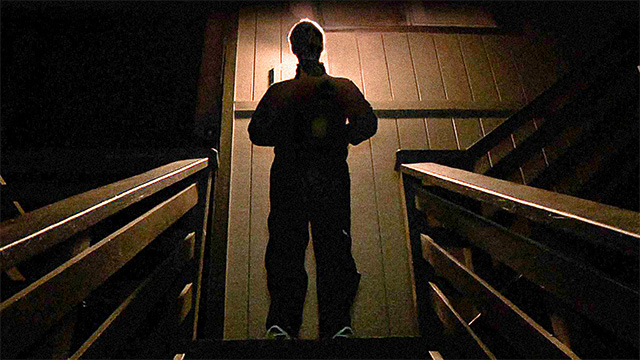 This film just didn’t gel with me, I dunno I like a lot of movies and generally look for the good points, with Creep that happens to be the concept, it’s a good concept, nothing original but we love a great Craigslist horror right!? We love them because they are scary and we all love auctions and the creepy shit that goes on with dodgy listings on a site that you can basically organise an orgy on. Out of all of the “stories” I’ve heard on youtube, reddit etc I can’t say this scenario is one of the better ones.

So Aaron answers a Craigslist advert and hooks up with Josef to film his tribute to his son, as he’s recently discovered that he’s dying from cancer and wishes to leave a memento for his unborn son. * YAWN * (we really don’t need a sob story to make this scary). So the one-day job turns into a few days and Josef is constantly doing stupid stuff and scaring Aaron, in a scene near the beginning they stop in at a café and Josef gets Aaron to disclose a personal childhood moment with him. I have no idea why but the scenes get pretty repetitive and fairly annoying until Aaron manages to make a break for it, he leaves, and gets on with his life when DVD’s start showing up from Josef. Aaron gets paranoid and starts freaking out over Josef’s stalking and obsessive behavior, he throws out the DVD’s and gifts that Josef sends to him. At one point near the end of the film Aaron arms himself with a knife and starts recording everything, in one scene he’s awoken in the night, he gets up and looks around his apartment in the background we can see Josef standing at the backdoor looking in but he disappears by the time that Aaron returns. Josef sends a final disc stating that he’s sorry and wants to apologies, Aaron doesn’t want to get the police involved and genuinely feels that Josef is sorry and agrees to meet him in a public place. He sits on a bench facing a lake, after positing up his camera to film the meeting from a distance. Josef walks up behind Aaron and violently slams an axe in Aaron’s head as he watches the lake. The camera soon cuts to Josef watching the video that Aaron left recording (basically the ending of the “film” that the viewer just watched). After he watches himself killing Aaron re rewinds and watches it again, giving commentary, then files the video with all of the rest of his victims videos while taking a call from another Craigslist advert confirming that he’s ready to be filmed… thus repeating the process again.

THOUGHTS
Nothing really captured me in this film. It was obviously a labor of love of both Patrick Brice and Mark Duplass, who have holy trinities (is that a word) the fuck outta this film, starring, directing, writing, producing and owning it all. I have never seen a movie try to dumb itself down so much and the repetitiveness is beyond annoying. It’s well filmed and thought through, I can’t fault that for a found footage/ mockumentary styled film it doesn’t commit many sins and in that aspect it’s pretty sound. What really kills it, is the content. The antics in this film only work if they are played out on a retard. No ONE would put up with this level of shit. The bad guy is constantly acting dodgy and scaring the poor camera man while demanding personal details, while there are people out there with seriously soppy hearts and would keep on trying to help the freak out with his bogus , most people would have kicked him in the balls, told him where to take his money and acting twice as freaky and probably would have buried him first.

Now the bad guy!? Oooh soooo freaky, while he tries to be creepy and imposing he’s just fucking annoying. I do understand that he’s supposed to come across as being unsuspecting but honestly a child would fucking out wit him.

PREQUEL?
There is scope for a prequel here, maybe explaining why this guy is a dick and where he came up with the idea of filming a video for his unborn baby?! Seriously? But hopefully mistakes will be addressed before this team starts to make another film.

THAT ENDING?
I really don’t understand why Aaron didn’t call the police or have someone else with him in the last scene it just seems so fake and forced. Like it was literally leading the viewer step by step into the most predictable ending ever. Josef managed to talk Aaron into meeting him in a “public” place, this is after stalking him, and leaving him creepy DVD’s just outside of his home. Most people would have called the police, well Aaron does but after being fobbed off once he gives up and tries to protect himself. I don’t understand why he didn’t show the police the DVD’s he had more evidence of this guy harassing him than we’ve seen of bigfoot and people believe in bigfoot right!? JUST GO TO THE POLICE!!! (asshole). Anyway after sleeping with a knife to protect him from this psycho he then decides to go to a “public” place, sit in the most secluded part of that public place and film himself from a distance, he doesn’t bring a friend or a weapon and sits facing a river which means he’s totally exposed and never looks around!? I was about ready to kill him myself when the killer creeps up behind him and plants an axe in his head. FINALLY! thank you!! Did anyone notice there was no goddamed blood? If you’re going to deliver a shocking gory moment go the distance.

Aaron does discuss things with a friend, but never with the authorities, he also just stays at home, I’d be at a friends place, especially when you know a weirdo is visiting your house.

The final WTF? How did Josef go about hiding the brutal murder and what did he do with Aaron’s body?

I guess that wasn’t essential to the plot so meh..

SEQUEL
It’s a promising concept, it just needs to be executed in a better way. The films ends in a way to ensure a sequel and I do believe two other films are in the pipeline so there will be more of it. Future films could improve on the mistakes that this one hasn’t challenged or overcome, maybe getting a few more people involved in the project might help. It didn’t work for me but nonetheless it seems to have a decent following so I wish the project all the best.