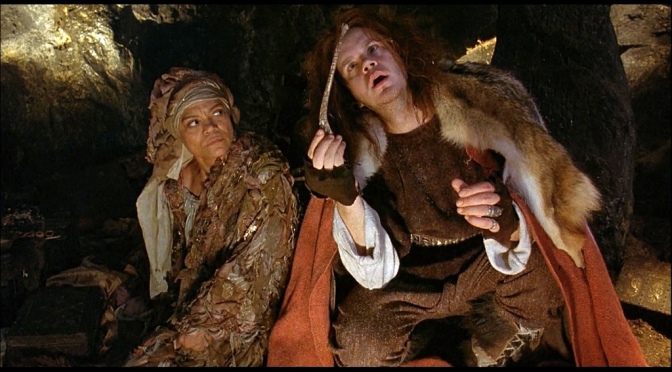 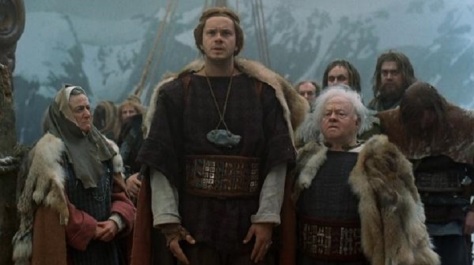 This was one of my favourite video’s back in the day, every time I rented this from the video store the card was filled up with my mothers signature, I was so thrilled when I eventually got my own copy and pretty much wore it out, but strangely I lost the urge to watching this Norse comedy repeatedly on DVD but during the holidays I chucked it in and it was quite refreshing to see that it hasn’t lost it’s surreal spark.

Based on the children’s book The Saga of Erik the Viking, but having nothing to do with the original plot (go figure) this British/Swedish comedy is filled with Monty Python style surreal comedy as well as some pretty entertaining antics all the way through, which is no shock as the film was written and directed by Terry Jones.

A bummed out Viking named Erik (amazing huh) who doesn’t have the taste for raping and pillaging and who is haunted by the death of a young maiden (Bond) gets incredibly depressed by his surroundings and seeks advice from a wise woman, Freya (Kitt) who tells him that Fenrir has swallowed the sun and is plunging the world into darkness and bringing about the age of Ragnarok Erik has to travel to the isle of Hy-Brasil to find the Horn Resounding to transport him and his crew to Asgard, awaken the Gods and petition them to end Ragnarok. Keitel Black smith (Cady) and his underling Loki (Sher) under the influence of Halfdan the Black (Cleese) oppose Erik’s mission as it will end their arms trade so they join this crew and try to sabotage him at every step.

At this point they go on an epic adventure and one of the most icon scenes is when they reach Hy-Brasil, where Terry Jones makes an appearance as King Arnulf whose daughter catches Erik’s eye, but the islanders are all high on something and musically retarded.  But after the Vikings break a sacred rule by shedding blood on the island, it starts to sink but Arnulf and the people don’t believe it and sink beneath the waves… what a total bunch of nutters, but strangely as goofy as the rest of the cast.

Obviously there is a healthy dose of Python members in this film and they are so acute and attuned with their unique brand of comedy that it doesn’t take many of them to really spice up this fantasy story. There are some questionable antics and it’s slightly watered down to what the Python crew have produced in the past but there are tons of in jokes, so there’s something for all the family.

Robbins is quite strong in this lead role but for me the show was easily stolen by Anthony Sher as Loki (not the god) I’m not sure how he managed it to be fair but even in this minor role his input really enhances this movie. The story is very fanciful but it does engage some interesting ideas, not only about Norse mythology but human morals on a whole. As with a lot of Jones’s work it really jumps from one extreme to another and the “special” effects are hilarious and purposefully bad. Even after all this time there is still some blistering energy and lots of confidence from Jones as a director. This really isn’t just another Viking movie, and boasts some reasonable sized laughs.