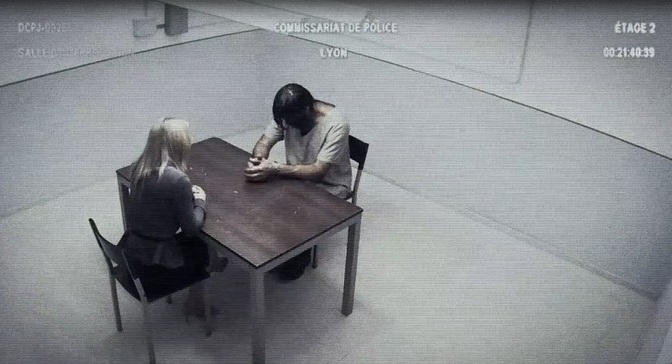 A modern day werewolf movie that awkwardly slots into the found footage genre. From the director who gave us another found footage horror only a year before, Devil Inside (2012) and sadly this film makes lots of the same mistakes but it also quite enjoyable.
There aren’t many werewolf found footage movies, in fact I can’t think of any, but this film isn’t pure found footage,  it’s  just a bog standard film with a few clips filmed via security cameras for added unrest.

Starting out from cam footage, a family are attacked by an unknown ferocious beast, if you hadn’t seen a trailer (or read this review) you’d have thought it was a bear on meth, it’s such a violent scene. Later through news clips it’s announced that Talan Gwynek (Brian Scott O’Connor) has been arrested for the murders. This is when Kate Moore (A. J Cook) steps in, to protect Talan as he’s not had a fair representation. While interviewing the curious man she starts to realise that he might just be capable of the murders, it’s not until after Talan is tested for Porphyria that Kate and her team including Gavin Flemyng (Simon Quarterman) start to realise just what they are faced with and how the werewolf curse is already affecting them…

It’s quite a good thriller, with a healthy dose of gore, action and some brilliant effects, the action scenes are well handled and Bell constantly uses the various surveillance cameras to add in various cuts that really enhance the pace and gore.

Cook and Quarterman seem to be constantly fighting for the no.1 spot, but it seems that Quarterman won and he is no stranger to working with Bell as he also starred in Devil Inside, there is a great dynamic between the two and I expect more them, what genre could they cover to make a trilogy, I’m hoping it’s going to be witches.. The show stealer has to be the Eagles of Death Metal’s  bass player Brian Scott O’Connor whose massive hands and height really stamped his persona in the film, it’s hard not to see him as a real life werewolf.
Sadly the film doesn’t really have a message, lots of things happen and it’s all very coherent and it doesn’t buy into the clichés but still it doesn’t really have a point. A mystery unravels and in the last dying throes of the movie it shows signs of having a sequel but there isn’t much depth, no tortured cursed being, no search for a cure..

As with Rec (2007) who has the unique Javier Botept plays the zombie like demonic girl trapped in the attic, whose bizarre body confused the hell out of many cinema goers thinking that it had to be CGI, but he’s very real, Wer has O’connor who’s amazingly large hands have give him the nickname “Big Hands”.. But his height and hairy appearance really adds levels to the beast character without much effort, and is perfect for this role.

Strangely this American film is set in France but nearly everyone speaks English, it’s something which is addressed but it just seems odd, as if the director wanted to set it there just purely due to the old French tales of werewolves that sparked Brotherhood of the Wolf / Le Pacte des loups (2001)  but it seemed to instantly ignore all Frenchness, the film also abandons the idea of an amazing transformation scene, there is a lot of altering and a few CGI scenes and some elaborate practical effects but don’t expect a exhaustive man to beast transformation which might be stereotypical but it would be interesting to see and compare, the fact that it was avoided really does hammer home what I feel the film is trying to do and that’s make the werewolf myth less of a myth and to give it a real “face”, trying to shed all of the nonsensical mythology and create something more tangible is tough and does require a lot of game changing.

While I really enjoyed the film, I can see why some people felt a little cheated. The characters don’t develop, they transform and do things but they remain quite untouched, there is supposed to be some kind of romance going on but it’s picked at but not visible. But with with a bit of hard work it could have been a lot deeper.

As with Devil Inside the film centers in on telling a story, going through the motions and showing shocking scenes, the players are more like puppets, there’s a tiny bit more depth in  Wer , as if Bell  is starting to learn how to enhance his cast but the skill hasn’t been perfected. It does stumble a bit but Wer does eventually make us re think the way we see werewolves, so it’s not all that bad.