I keep forgetting these updates but I managed to watch a couple of films last night, both brilliant in very different ways, and two classics, one new and one old and close to my heart. 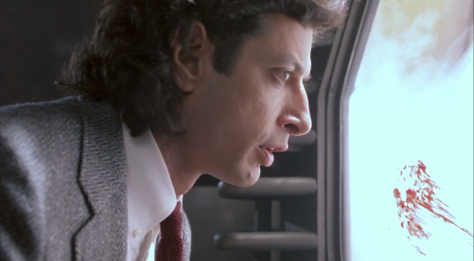 Despite being “not a fan” of remakes this film has always been a great favourite of mine, it’s simple and effective but taking the science and horror brilliance from the 1958 classic and letting it lose in the hands of Cronenberg resulted in some spectacular effects and a highly entertaining gory film, that still has some cult status, those amazing pods, the body shocking gore which rocketed Goldblum’s career, although he still plays the same character in all his films. One person I think we all forget is Stathis Borans (John Getz) an actor I only recognise when he has a beard, I’m going to write a piece about him, the only character who successfully makes it in both films although massively scarred for life both mentally and physically. So for those who haven’t seen the film (many shames on you), this remake is similar but much more daring that the it’s much older original, I’ll get into the differences in another post. But a brilliant and recluse scientist Seth Brundle (Jeff Goldblum)manages to build Telepods that transport objects via particles through space, while conducting a test he manages to transport himself through space but unfortunately a fly is present in the pod and they are genetically spliced together. It’s that simple but becomes so complicated for him as he mutates into a 6ft human fly.. queue The Cramps! Cronenberg, well known for his obsession with the flesh turned a retro horror into buckets of puke and lose body parts gore romance, and we can’t forget this romance as it was pretty real, Gena Davis who plays the love interest did in fact become involved with Goldblum. For me it’s brilliant and still stands the test of time. 9/10

I’m kinda ashamed that it’s taken me this long to watch Blood and Black lace, but honestly It’s not like I’ve been sitting around NOT watching copious amounts of films and a ton of Giallo, but I finally got the chance to settle down and give it some proper attention. The last time I tried to do this there was a domestic meltdown and lets not say anymore.

Blood and black lace is famed for it’s deep and vivid colours about a killer stalking members of a prestigious fashion house. Giallo has always had this obsession with brutally murdering beautiful women so this setting is perfect and the film is a real benchmark in Italy’s longest running cinematic movement. The film is stylish the plot is thick and layered, the murders and torture are pretty horrific for its time. It was a pleasure to watch and I can’t to do so again.