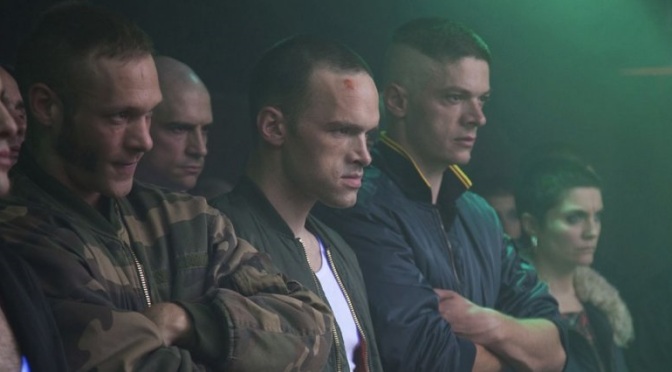 Despite the name the film isn’t quite about being French but the tired old nationalistic ideas which make people believe that they are better for having been born in a certain country and using this as an excuse to be a general douchebag. But the magic of this familiar film is that despite the toxic nature of the mindless characters our lead manages to feel more pride in himself after he abandons his gang of violent misfits.

Marco (Lenoir) is a skinhead, a violent single track minded skinhead who feels pretty brave when he’s on the streets with his friends Braguette, Grand-Guy and Marvin. They spend their days intimidating anyone who looks foreign, damaging property and plastering up sticker and posters illustrating their neo nazi connections. At home life is more demoralizing, his father is a pathetic drunk and his mother just fumbles from one day to the other. While at work Marco gets on with everyone, he’s calm and productive and it’s unlike his street bravado, he’s just another guy. But still he feels as if he belongs with his gang and attends gathering and rallies and even falls in love with a chick who shares his ideals and they produce a darling baby girl.

Slowly Marco pulls away from the group, but growing up can be hard, after seeing violence against his gang and experiencing panic attacks when he realises that the other normal citizens look down on his for his erratic and vile behaviour, the doctor/pharmacist who helps him while in this pickle remains a good friend, he takes him out camping and exploring from time to time and this is all part of his rehabilitation back to the norm.

Although French Blood sounds familiar and it’s not the first film of its kind, we’ve seen many while males transition from a total bastard into a relative normal human being, Edward Norten had a similar journey in American History X (1998), the only real difference here is that you can literally see Marco’s adoration for his mentor and gang leader wither and die inside of him. Early on in the movie it’s littered with dank street violence, grimy night clubs and just general scummyness, whenever Marco meets someone who elevates him and has he grows his hair back and becomes law abiding there’s a notable shift in the surroundings, streets are much more airy and pleasant, life is good.

But will he ever really shake off his hate? Will he ever be able to stand up against his old friends? The film ends with the lead in of the French Elections where there was a surge in the rise of several Right-Wing parties, Marco also sits back and watches what is happening to his country, mostly due to the work of his own hands, but his reaction is .. Well you’ll need to see to find out.

The film manages to really capture the attention, while everyone is shouting about the heritage or in contrast just calming talking about why they love nature, Marco is often centre screen, the catalyst, slowly brewing ideas and theories silently in his head, but then he dashes into action and it’s through his actions that you see this changing concept of the world around him.

It’s graphic and strangely delightful, sometimes addressing this subject can be very disturbing and hard to watch, while there is some boisterous behaviour and the speeches and language is hard to deal with it’s actually a continual rise from dank to decent and it feels good that Marco is achieving something, although I think it’s important to that these films are made to illustrate how mindless it is to hate people for such a Ludacris reason but I’d like to see more challenging films made. But this is quite brilliant and something I can enjoy again in the future.