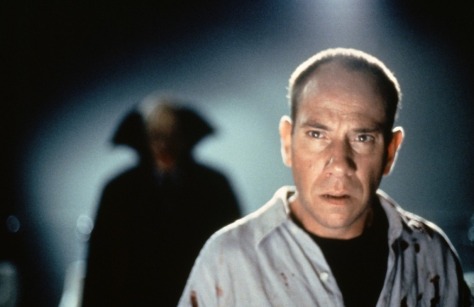 I’ve never been all that interested in Stephen King novels, I’ve tried reading a few but I’m just not into his writing style, but the adaptations of his books do impress me from time to time, sadly this one had gone unnoticed for quite some time but I’m catching up so bear with me. I had seen a majority of this film from various gifs over the years and never really paid them much attention, it’s not real secret what the film is about, the DVD cover has the creature on it, but still the mystery and chase in the film keeps the story alive and it’s totally engrossing.Inspired by a short story from King that featured in the Prime Evil collection of horror shorts, it had been cleverly adapted into a movie in a way which means it doesn’t feel as drawn out., than some of King’s epic retellings which seem to take up the best part of  weekend to watch. This creepy vampire tale offers some mystery but points the finger at some real live blood thirsty monsters, i.e. journalists!

Ferrer does an amazing job at playing Richard Dee’s an aggressive asshole journalist who has no issues with insulting and dehumanising everyone around him, after destroying a team member his boss introduces him to a new rookie, Katherine Blair (Entwisle) who eagerly picks up on a story of a series of bloody murders at remote airports after Dee’s expresses disinterest in the story feeling it’s below him. So hyped up about his own glory as the top reporter for “Inside View” his editor Merton Morrison (Monahan) just can’t win with this incredibly awkward individual.

After further murders, Dee’s insists on taking on the story, and kicking poor Katherine by the wayside but she picks up the story again and soon the two are working against each other, Dee’s remains on top by being more aggressive and staging the photos to make the crime scenes look gorier. Meanwhile the Night Flier is just out for blood, and leaves a pretty bloody trail behind him for both journalists to follow, but one of them really sparks his interest as he can see a kindred spirit in their similar blood lust.

The overall aesthetic of this HBO film is similar to an early episode of the X-Files, but for the most part this is a monster chase, With Dee’s being a sort of rough street Film Noir detective with the instinct of a tapeworm his desire is to get inside the mind of the killer, it becomes an obsession as the case grows and he starts to admire this man/monster.

The monster is seen in the shadows for most of the movie, flying an all-black Skymaster airplane and skulking around in the shadows dressed in a supermarket Dracula outfit but don’t let that fool you, he’s really a giant bat, but one that doesn’t fly which is probably the biggest let down of the film but truth be told it’s a inventive touch if you can get your head around it. The magic really works in the final act when Dee’s get to meet his man crush monster, there’s a level of respect and admiration but it comes with a bucket of fear, the shot is filmed to perfection, with the bulk of the special effects being laid out just for this scene, it’s a bit dated by today’s standards but a lot to be respected.