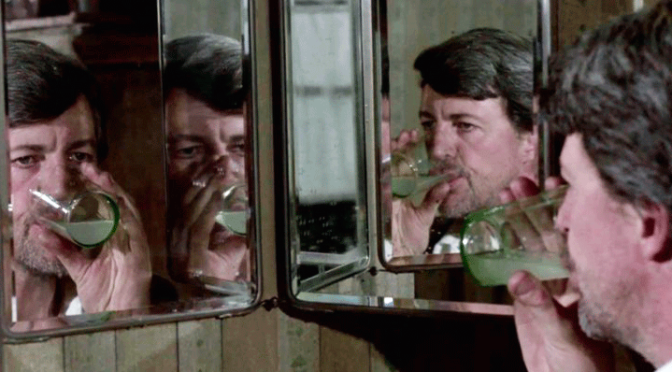 After seeing the epic Dogtooth (2009) by the cult director Lanthimos, I was mystified by the circumstances, the basis of the story is a man raising his family in such isolation,  their offbeat lifestyle seems so extraordinary to the eye of any outsider, the whys were never really answered the film just happens. But after a little digging i discovered that the film isn’t a remake but has a similar storyline to El castillo de la pureza, an excellent Mexican drama where a man isolates his family to protect them from “the evils of human beings”. While I thoroughly enjoy Dogtooth everytime I see it, there’s something deeper in this retro classic as it digs under the skin of the abnormal situation.

Gabriel Lima (Brook) and his gorgeous wife Beatriz (Macedo) have invented a brilliant homemade rat poison, their children all have roles in helping them manufacture this brilliant powder. Each day they get up and get to work, always in silence when working, then their father gets dressed in formal clothes and goes out to sell the rat poison to local shops and businesses, meanwhile the children have to exercise, learn and for a while they play.
Things start to breakdown, slowly at first, but as the movie builds pace it becomes a waves of crushing emotions for the disciplined and sexually driven father and more jail time for the children. Leaving their poor mother looking on at the madness.

Gabriel is a pretty stern father, the film opens with the family hard at work, the youngest daughter, a mere child exclaims that she’s finished, he tells her to be quiet, the then accidently knocks over the test rats and they escape, her brother kills them with a broom, she’s swiftly slapped around the face and put into a cage/prison and left alone in the darkness while the family continues to work. These are the kinds of conditions that the family “live” in. Constantly under the watchful eye of their father who runs the household like a military operation. The only repose is given to his wife, a beautiful woman who lives in fear and hope, believing that her husband’s decisions are the best for their family she doesn’t have much say in what goes on, but at times she receives little gifts.
The confines of the home and , which is a fairly large villa which sees a lot of rain, starts to take its toll on the already punished family, the older siblings start to experience those teen urges but only have each other to practice on, the father’s rage spiral out of control, especially as the outside world starts to creep in, people want to inspect the working environment, he needs a licence, manufactured rat poison is cheaper, nothing is going right for him.

It’s unusual  that a films main character is such an asshole, there isn’t anything about the man which anyone would want to identify with or attempt to understand where he’s coming from, and as his mania grows it’s easier to hate him.  In one scene when he’s peddling his poison, he asks a shop owners daughter for sex, and offers her money when she turns him down, he tells her mother a blatant lie and leaves as the girls gets slapped about for being a tramp.

There’s so much of this film which you don’t want to have to see, but it’s mesmerizing and really draws you in, each turn things go further down the pan but a morbid curiosity keeps your attention, i think mostly because of the surreal behaviour of the family, as if they are trapped animals in cages, and I suppose in ways they are.

A psychiatrist would have a field day and need a huge staff to assist all of the issues that the family display and it raises many questions about cults, families, feminism and everything in between, but providing it’s not too disturbing there’s a lot of powerful drama to be witnessed from the vulgar beginning until the 1000 yard stare from Beatriz at the bitter end.. When it’s finally revealed that this is based on a true story.

Vs: Dogtooth Vs Castle of Purity