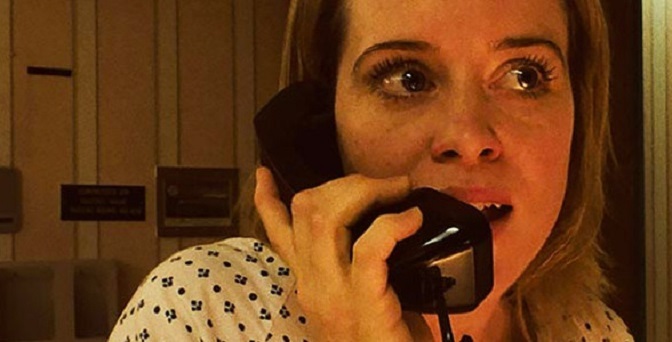 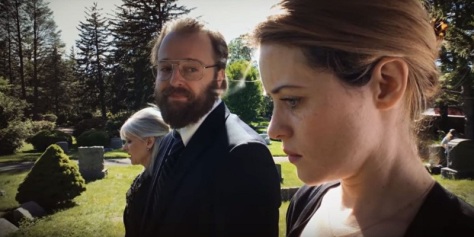 Everything about the opening of this movie is just dull and unassuming, which is a risky and dangerous move from director Steven Soderbergh, luckily it doesn’t last too long. While introducing the lead, Sawyer (Foy), we learn just how mundane her life is, the faceless office worker, who suffers all the nagging and office politics as the rest of us, she eats lunch while skyping her disapproving mother and later hooks up with a (not tinder) date, but after taking him back to her place with no strings attached sex, she freaks out thinking that he’s her stalker and the film re opens with her talking to a therapist.

We start to learn that Sawyer has been running away from an unknown stalker, hiring professionals (Matt Damon) to secure her routes to work, protect her personal details etc., but simultaneously we are also privy to the idea that she might be suffering from delusions and that the stalker is a fabrication of her overactive and vivid imagination, Unfortunately at this point in the movie she accidently signs herself into a psychiatric ward for observations, and for the rest of the film we, alongside her have to try and piece together just how sane or unsane she really is.

It’s not laid out in any measured fashion, there are no clear “aha” moments, you have to piece together an ever confusing series of events as Sawyer adjusts to her environment. Her threatening encounters with Violet (Temple) are girl gang legendary but there is a purpose to these, and she strikes up an unusual friendship with another “inmate” who has a contraband phone, another character who brings more drama into the story later on but it allows for her to call for help from her flustering mother but the carvery goes eerily silent way to early causing a sudden turn of events.

Sawyer’s determination to prove that there is a stalker increases, as does her erratic behaviour,but this only results  in her getting a longer time added to her observation, as a viewer you can see her getting sucked into the system forever much like McMurphy in One Flew Over the Cuckoo’s Nest (1975), fighting with Violet causes most of the additional time and her character is one of the best cast, Temple has a knack of picking up unusual character and really threw her all into this role like many others over the years, this psychotic young individual is pretty dangerous in her own rights as she carries a shiv but probably too bonkers to actually use it.

Sawyer outbursts increase when she starts accusing a member of staff of being her stalker only rile up the situation more. Together there is a small complicated community, within the confines of this military led hospital, it’s a common belief that the hospital is keeping people for set periods to claim their medical insurance but once the money dries up they are set free, this and other conspiracies float around in the mess around the victimised Sawyers who’s own paranoia isn’t helping any situation.

The entire film is shot from an iPhone which leads to some  unfamiliar shots but it doesn’t feel like a found footage movie the motion is very measured and it’s not frantic like Cloverfield (2008). It’s not jumpy and erratic, dashing from scenes, it’s smooth and well handled camera work, it does flow better as the camera can get into smaller areas and this i used to really change the appearance of the setting around Sawyer at times but seemed to handle the action really well.

Having directed a hose of various movie Steven Soderbergh has really out done him with this dynamic film, the film is on the edge of being believable, having some background to psychology there’s a few things that just wouldn’t happen restrained patients aren’t left with others in a communal room, the horror stories of being signed into an institution isn’t quite that black and white but this is the story we’re presented with so let’s just get into a well crafted thriller and enjoy it, for all it’s goofs it does manage to build tension and curiosity especially as the ending unravels like a Giallo mystery and for me it really does work in deep cerebral ways. There’s a little extra clip at the very end that gives the movie an alternative perspective to the ending, read into that what you well, a little nudge to Misery (1990) I felt. It has minor flaws but for me it was brilliantly played out.