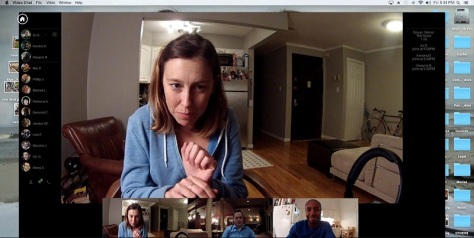 It’s quite easy to simply explain this movie as being a demonic indie version of Unfriended (2014) but that would be doing it a disservice as it’s actually better than unfriended, not only is the creepy atmosphere more enhanced it has much better setups to it’s more shocking moments.

Launching with a masked figure warning us about “certain events”and truths that have to be exposed to the public, an  Anonymous style broadcast is a stark warning from the E Demon Resistance that opens with a group of friends start a routine web chat, and start to enact their favourite past times which is basically pranking each other which they lightheartedly called “getting freaked”.  The first uber elaborate prank involved a young man speaking with his grandmother who warns him about a haunted trunk and witchcraft. He proceeds to go into the loft where he has opened the trunk and starts to perform a ritual which results in him releasing a deviously clever demon that had been trapped for centuries in Salem, Massachusetts.

Much like Unfriended (2014) the film is a a set of screen and online chats both physically and via messenger between the group of friends and some of the people surrounding them. Slowly the group start to become aware of the dangers which are soon to be literally kicking in their doors and attacking them but how far and wide can this religious infection spread? And who can help them fight this unseen foe!?

For the most part the characters are pretty solid. There’s a degree of adaptation and building up of the roles which is handled quite well considering that the stage is quite limited when viewing people via a faux webcam, the stand out characters are Kendra (Kelly) and Dwayne (Wylliams), Kendra has to take on a lot of the physical aspects of the movie while Dwayne’s plight is more emotional when his young children become involved in the demon’s diabolical plan . Unlike terrible movies such as Truth or Dare (2018) the possessed person isn’t sign posted a mile away and there’s a degree of sleuthing that the audience can engage in during the film, which adds another dimension. 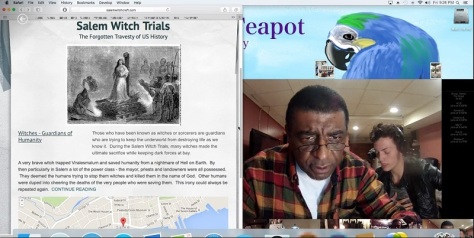 This is the first full length movie by director Jeremy Wechter, and it shows, the film at times feels like lots of micro films put together  there are some annoying luls which slow down the plot but altogether it’s a really good effort it just needed to be a little less predictable and maybe amplified the gore and horror. Having a group of demons attacking you in your home shouldn’t feel so safe, for example Evil Dead  (1981) is a prime example of how much action can be involved in a demonic siege, where as things are strangely more settled in E Demon, some scenes just see a group of “people” just standing around each other psychically attacking them and that’s just not entertaining, but it’s still better than Unfriended!!