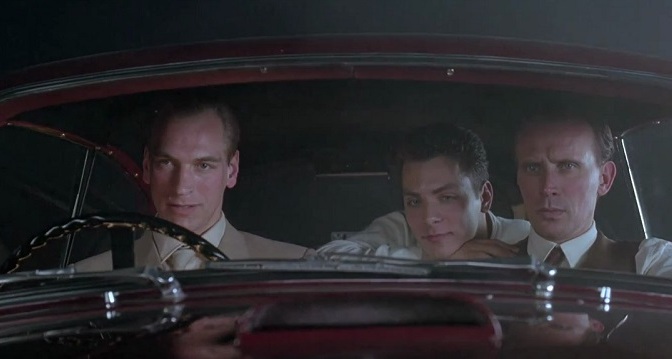 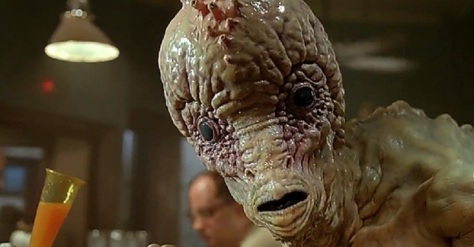 This bold, Kafkaesque putrid remake of the legendary novel by William S Burroughs, is possibly as vivid and imaginative as the original book, but if you’ve read the book you’ll realise that no film could ever really be a true adaptation, so the screenplay is a metatextual adaption. Detailing characters and scenes from a complex novel and other works from Burroughs, both fictional and from his journal and the events which lead to the 1951 death of Joan Vollmer, Burroughs’s common law wife.  So while it’s not entirely Naked Lunch, it should at least FEEL like Naked lunch and at times it feels a lot like Burroughs but slightly more coherent.

As a surreal autobiographic piece the film follows the life of William Lee, who is basically Burroughs, a bug exterminator who discovers his wife is stealing his insecticide and using it to get high. Lee is arrested and starts hallucinating because of his exposure to the powder. Believing that he’s a secret agent  he beings a strange relationship with two handlers, one is a insect typewriter and an alien “Mugwump“. The typewriter assigns him a mission of killing Joan, she’s allegedly an agent of an organization called “Interzone”, Lee dismisses this notion but on returning home he finds Joan having sex with a friend and kills her, inadvertently carrying out the mission, he flees to interzone, a city in North Africa where he spends his time writing reports to his handlers, this slowly becomes the Naked Lunch book and after taking more mind altering drugs and getting a new typewriter, a Clark Nova, this insect  stresses that he needs to find Dr Benway by seducing Joan Frost who’s a doppelganger of his dead wife and then things get really weird, and with the addition of a drug that is made from a centipede.

Exterminate all rational thought, That is the conclusion I have come to.

The film is quite long and as you’d expect there are many curious scenes especially for a studio film, it’s probably the strangest and it’s not going to be everyone’s’ cup of tea, even Burroughs fans struggle with it.

As much as the film is obscure and has riveting moments it is incredibly long, it feels longer because at times you lose the sensation of “getting somewhere” randomness keeps happening and while it’s visually intriguing it doesn’t necessarily link together but if you’re willing to allow things to happen, and if you’re on the same bug juice as Burroughs, you can make millions of connections. Weller really fits the boots of Lee, this frame and cool character go swimmingly well, although I think maybe the cast needed to spend some time out in the desert licking toads and tripping on drugs to get a real feel but obviously that’d be a step too far. Weller is joined by Roy Scheider who is a crazy doctor and part time drug dealer, a character who does nervous so well. Ian Holm and Julian Sands are inhabitants of “Interzone” and seem like suave extras from an episode of Poirot.

For me the golden moments are the bugs, I’m a bug fanatic and heavily into surrealism so there’s no doubts that this really peaks my interest. Cronenbergs creation of body horror twinned with a melancholy story of repenting really unleashes some disturbing cinema. I’m drawn to the pulpy bodies, organic typewriters and (very) strange characters in bars, that you hope not to meet in dark alleys, although there’s no real fear in all of this, I love how Lee just takes things in his stride despite being surrounded by mutants in an ever changing and growing world.

By the end of the film there’s a real sense that anything can happen, the Middle Eastern city that he ends up in, is constantly mutating, the sense of waking up somewhere new everyday with new adventure and disjointed memories would lead anyone into psychosis or believing they are now a fully fledged paranoid schizophrenic in a google generated deep dream experience.