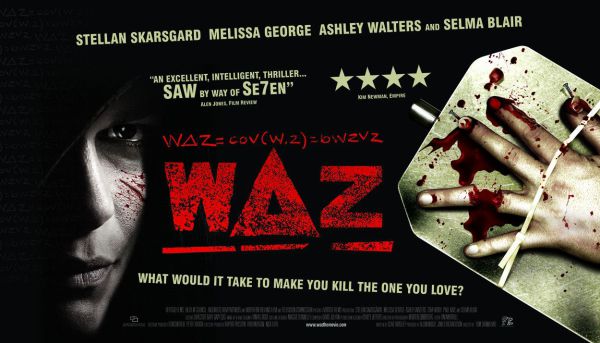 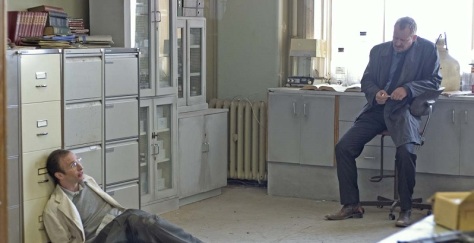 With the rise in popularity of the Saw Franchise, there were bound to be some copy cats, but this one stood out from the rest, not only did it have an impossible name but it’s based on a real equation, one that is found carved into the bodies of the victims. The serial killer at work here is obsessed with mathematical equations and revenge.

The two cops on the killers tail are the craggy Eddie Argo (Skarsgard) and his new rookie partner Helen Westcott (George) who’s quite fragile and not really up to the job but is determined to make it work.

The two are pretty clueless as to what they are up against at first but they soon start to unravel the equation (wΔz = Cov (w,z) = βwzVz)  with some help from a drug addicted Denis Penis, who helps explain that it translates to “kill your loved one or be killed”, and ever so slowly they also piece together the dark secret that sparked the killings via confident of Eddie, a young informer that he pays special attention to.

Its pretty unoriginal it’s not difficult to see it as Saw in reverse, the darkness of filming is slightly like a urban version of Se7en and there are tons of other similar connections that can be made but it has some unique charms, Tom Hardy’s character adds some spice, he’s a tough gangbanger with a soft spot for his grandmother, which leads to one of the more memorable moments, he goes out to kill a rival, but half way through the blood soaked hit, he has to take a call from the confused old lady and explain how to use the remote then hangs up and carries on killing. He has a heart but also has to get business done.

There’s a few twists to keep the film fresh but it’s hard to keep it alive with all the cliches and typical bullshit that’d you expect from any modern gritty cop drama. This could have stood out from the rest and been so much more but it failed to pick up and be brave. It’s a pretty nasty little thriller with some extensive torture scenes and other  bits of body horror and grime but switching from boring to over exaggerated doesn’t help this interesting concept.