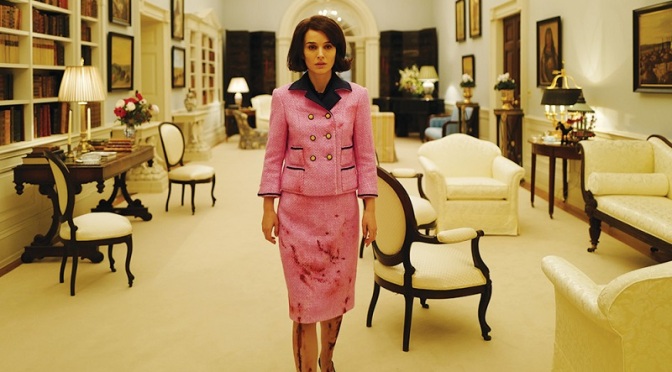 There’s a time when a country is on the verge of a historic event and during the run up it’s common to look back at the achievements or disasters, but with the verge of a new president this raw and varnished portrait of Jackie Kennedy arrived at a reverent time.

Concentrating on the events from the point of Jackie the film revolves around the shooting of her husband , the world was shocked but the world was talking politics, talking about men and often Jackie was totally ignored, considered a bystander having everyone assume her feelings and emotions at the time and for years after. Pablo Larrain set himself a massive challenge with his first English language film, he’s taken on a task which could offend a country but his subtle hand and sympathetic eye has assured this film will be warmly welcomed. With an event this large the film is able to jump around to and fro but encompasses the tragic and lonely situation that Jackie was left in.

It appeal of the lies with the amazing character acting from Portman visually she’s close to the character but her overall performance is stunning, at times she seemed a little wooden but she regains herself and the movie flows on. The starting point is the aftermath, a plucky reporter arrives at a extravagant residence to give an interview with a more seasoned and slightly bitter Jackie, Billy Crudup has the task of massaging the story from her, often touching a raw nerve and quickly being put back in his place, but really casting him in that role was a little overkill as he was so underused and ancillary to the story. Together their few scenes show how much the awful events really hardened Jackie.

There are some scenes where Portman looks like a mannequin, porcelain faced and still, the look of a woman suffering from post-traumatic shock and incredible grief, it works, she subtly goes through all the different phases of grief while keeping a jovial public smiling face.

Larrain’s technique and eye is much centred, it maximises the scale of the government buildings really overpowers his shots, and within them wanders a lonely Jackie the pale colours of the film all wash into each other and seem to be taken from Jackie’s iconic wardrobe, pale blue, pinks and creams. The movie becomes brighter and darker, more vivid as the media frenzy begins to pick up and Jackie gets lost if procedure and protocol.

Portman pretty much carries the film, there is a strong supporting cast,  strangely Crudup interjects a lot despite his short scenes, he’s concise and asks the questions we would all like answered, but they aren’t on screen long enough to make an impact. Overall the portrait is complete, there isn’t anything about her life before her husband’s appointment so the foundation is weak but the gleaming details and depth is there, you can feel the grief through the screen.

A sentimental and thought provoking insight into the woman behind the man.