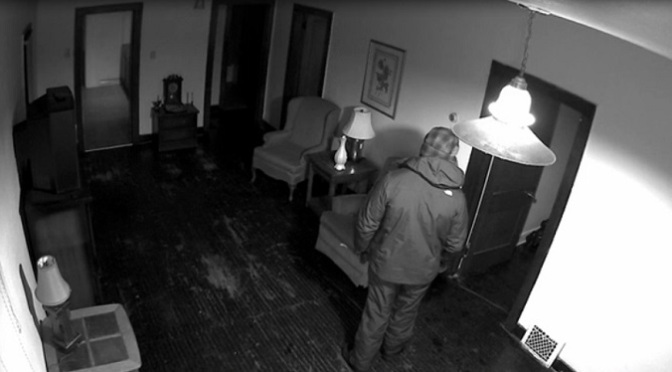 Fitting somewhere in between a documentary and mockumentary it’s easy to see the appeal with Demon House. not just based on real events the film struggles to remain a proper found footage movie with a few added dramatisations and real interviews about a real haunting in Gary, Indiana. The full details of the Ammons haunting case were documented and followed by Zak Bagans, who then purchased the house after the family moved and his attempts to coax out the entity.

Demon House starts with the great deal of promise and effective film making, opening with the purchase of the property the look and feel of the film is spot on as a documentary which is how the film has been labeled. Zak buys the property, sight unseen and just on the knowledge of the mass hysteria that broke out when an African American family were experienced demonic possession in what was called a “Portal to Hell”.

Zak spends most of his time organising a team to help with his paranormal investigations, he interviews various police officer and social workers who dealt with the original haunting, giving him tours of the property and inside information. For these early introduction scenes there are some dramatizations, clearly labeled, but offer some impressive effects showing the most startling scenes, like a young boy walking backwards up the wall while being possessed.

Eventually after getting everything ready and meeting the family and seeing their reactions to being back in the home, the crew start to pick up on creepy noises and as the reactions from the house increase they retreat to a hotel, even there they are plagued by apparitions and general creepiness, but that’s it, just just general stuff.

The feel of the movie is extremely real, but I refuse to accept it as a pure documentary there is just too much well timed paranormal activity, but still for the most part it really captures the right atmosphere.  It’s core is aimed at the non-believer, scratching at the ideas that these things are best left alone. It’s all very evident to the audience what’s going on and there are no real surprises or amazing twists to the plot but the movie does make progression through the history of the site and meets some lively characters who have a wealth of knowledge and first hand experiences of the crazy activity that occurred.

Zak and his crew, do make for some great entertainment but it’s nothing mind blowing or terrifying despite it’s connections with real life events, obviously the film neglects to mention all of the red flags of the original case and ends on a downer that doesn’t really leave scope for future scares, sometimes that lasting open ending is really worth it for demon.religious based horrors are the main basis is subjective.

It looks authentic but there’s just enough to really grip the imagination and it breaks no new ground. If I was going to play in the house of 200 demons I’d have some religious backup, but this isn’t about being real it’s just about pretending to be real. Sadly it’ boils down to just another average movie, which is a disaster for what it could have been, and I feel this is all down to ego which is terrible.