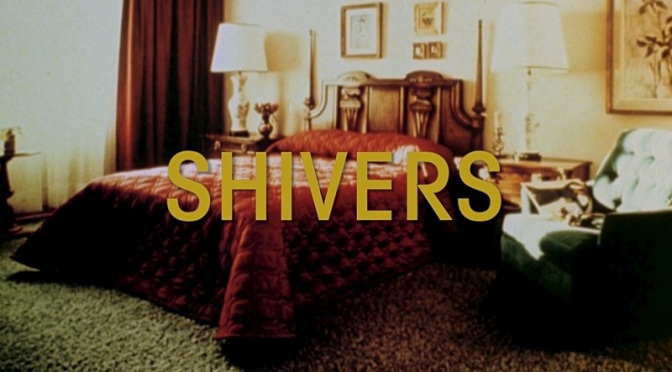 AKA The Parasite Murders, They Came from Within and Frissons,Orgy of the Blood Parasites

Opening with a commercial about the most perfect living area known to man, The Starliner Towers is a modern high rise in Montreal, the site manager named Merrick invites affluent people into their new faultless homes, in one of these units the first gruesome scene unravels, in a silent and violent clip, Dr. Emil Hobbes attacks, Annabelle, a young girl in a school uniform, strangles her, cuts open her stomach and pours acid into the wound, finishing himself off the scene ends, meanwhile Nick (Migicovsky) has stomach convulsions in his bathroom.

Once the bodies are found by resident doctor Roger St. Luc (Hampton) talks over the strange events with Merrick and his later with his constantly chowing down medical buddy Rollo Linsky (Joe Silver) who jovially talks about Hobbes latest project which involves “a parasite that can take over the function of a human organ”.

T-E-R-R-O-R beyond the power of priest or science to exorcise!

Slowly the inhabitants are slowly taken over by gross bloody slug like creatures that send them into a sexual mania while Roger St. Luc and his delicious girlfriend/nursing assistant Nurse Forsythe (Lowry) but after finding out that Annabelle was possibly the most well loved prostitute in the Tower the infection might have spread further than anyone could have realised.

This sometimes uncomfortable horror could only have been created in this true way in the 70’s when the whole idea of global love hit the scene, twinned with the first signs that we were destroying the planet from out greedy actions. While this is Cronenberg’s full length debut movie, it has a lot of promise while certain aspects are a touch clumsy, the camera work is experimental but choppy, the lighting and focus aren’t always crisp and en pointe but in all fairness this does fall off as the movie falls into utter madness.

Scraping out a new path in horror away from anything classical it was clear to see that Cronenberg wasn’t happy with sticking by any of the rules and he quite literally forced “Sex Zombies” onto unprepared cinema audiences all in the guise of a lush high class living complex. It could be argued that there’s suggestions about how our deepest and seediest inner instincts can’t be eradicated from our modern and future society, not matter how posh and perfect we paint ourselves the human race has baser needs and they linger in all of us, much like J G Ballads now cult classic book, High Rise, society is always perceived as being on the verge of breaking down into a violent kinky mess.

It took a few more films for Cronenberg to really polish up his filming techniques but his stories have always been brilliant. The body horror is pretty still internal in this debut, Nick was one of the main catalysts, who harbors a few of these sluggy nasties, spending time laying on his bed watching them squirm around inside his stomach while his doting girlfriend cries to her best friend about his distance, his character seemed to be a forerunner to Brundlefly, I suppose by the 80’s there was a budget to afford Jeff Goldblum. Barbara Steele plays a pivotal role as a luscious vixen who lounges around but gives a brilliant performance as a possessed hussey who contracts her sluggy in a slightly underpowered but effect bath scene. 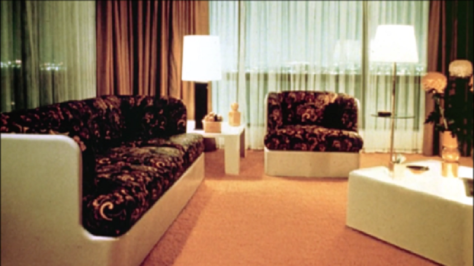 In the final showdown sees Roger St. Luc running a gauntlet through a maze of whacked out crazies, much like Crazies (1973) which also stars Lynn Lowry, who takes a brilliant sucker punch to the face in this film, if I were brave enough to write a list of leading ladies getting their faces slapped this might be in the top 5. Young children are chained up barking, and old ladies want to get their groove on, there’s a touch of “way out” talking but for such a complex film there is very little gabbing, which is a godsend, it’s something special when a director doesn’t assume his audience can’t keep up, although we’re more than happy to just watching this one play out as it’s a marvelous movie set in a vivid world insipid 70’s style.