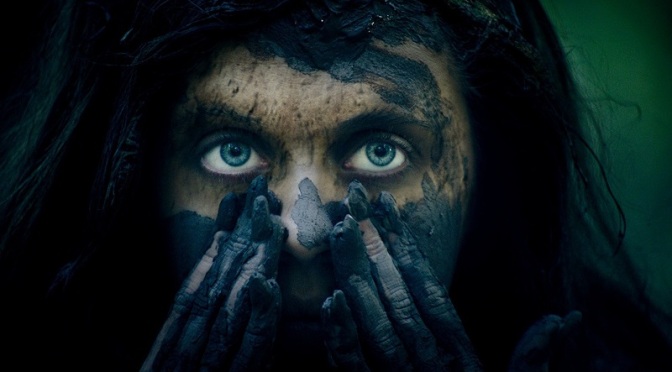 Strangely this movie reminds me of Teen Wolf (1985), in a roundabout way it’s very much a coming of age Werewolf movie and yet speaks poetic volumes for a reawakening of feminity for anyone who feels a call for the wild.

Anna (Powley) grows up confined in a room in a remote house in the woods, looked after by her Daddy (Dourif) who is keeping her safe from the Wildlings, strange creatures with folklorish natures who stalk the woods. As Anna matures she starts noticing differences, as many girls do, although a dreaded fear sets in to her Daddy and he starts injecting her in the stomach with an unknown substance (although if I learnt anything from Ginger Snaps (2000) then this is a Wolfsbane concoction). This only slows down her development but doesn’t stop it, eventually it leads to Daddy attempting to commit suicide but it goes drastically wrong and Anna is rescued by mild and ever caring Sheriff Ellen Cooper (Tyler) while the authorities are trying to work out what do to Ellen adopts the girl temporarily and tries to give her a normal life. Ellen’s younger brother Ray (Kelly-Sordelet) is a similar age to Anna and tried to help out, but by the time the pair are ready to go to Anna’s first house party, the teen, without her miracle drug is starting to transform again, her human teeth are being pushed out by something much sharper but the only person who has some insight and who is willing to help her comes in the guise of a one eyed man wearing a wolf skin who lives in the forests surrounding the town played by the multi talented James LeGros .

The Wilding is a movie that occupies the standard very distinct three acts, the first does have this creepy childhood mapped out for the tiny girl, believing in monsters in the woods it feels like A Company of Wolves (1984) mythical and on the verge of a something very real creeping through the woods, it could have gone anywhere, once anna has been rescued then her life and them movie are turned upside down, this shift in the style of the movie have angered a lot of viewers and I did feel a little cheated but the pay off at the end during the big showdown is worth the middle teen drama. Anna’s character is brilliantly acted by all three of the girls who took part, there are lots of curiosity in each person, especially the Wolfman, and Daddy but what really lets the film down is the dialogue, it doesn’t really reflect the depths that the film attempts to dig to.

As a debut movie, Böhm has shown a lot of character and talent, there are downsides, the dialogue and it could have done with heavier use of sound and just a bolder effort to add energy to story. there is a lot of maturity struggling out of this director and hopefully things will just get that much better. It’s debatable if it works in terms of seeking to explore the battleground of becoming a woman but with other cult classics like Ginger Snaps (2000) out there it’s not an easy challenge to overcome.

For some of the film the horror element is completely dropped, which is a shame as Böhm has a knack of creating a creepy atmosphere but when the film falls into drama mode it loses a lot of credibility. but as a the horror version of puberty it’s quite a challenging story.

I found it charming and full of wonder, Böhm really shows a lot of sharp wit with his storytelling along with the ability to raise and answer some difficult questions, the downside is that with such a heavy dose of feminist politics the film opens itself up to be judged too harshly on something which is often blown out of context but it’s interesting to see how the feminine call of the wild is answered with as much ferousiness as any other character contoured by the moon. I personally would have preferred a horror movie flavoured with fantasy but this is very much grounded as a fantasy movie with the odd slash of fanged horror. But however you see it placed on the scale it’s certainly a stand out item of the horrors from the year as it’s broadly stands with a well paced and thought provoking story with brilliant subtle characters.