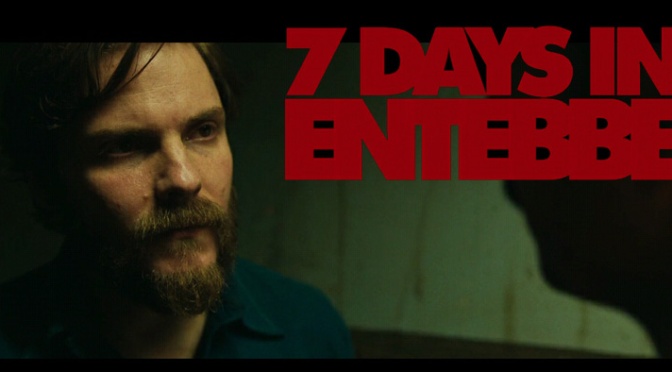 I think this film was made with the idea that it would be considered as a critically acclaimed masterpiece but while it’s based on a tough hostage situation from 1976 It seems to be more determined to connect the horrific events with a dance routine than to give a clear and “entertaining” account, and while the dance is interesting it feels like a failed attempt to add some art house to an already downtrodden film that in hindsight is just a series of the depressing sight of actors struggling through dreadful material.

1976. A Flight From Israel To Paris Was Hijacked. What Happened Next Changed The Course Of History.

Based on the events of Operation Entebbe (https://en.wikipedia.org/wiki/Operation_Entebbe) which has been dramatised a number of times already, it seems that a new generation needs a reminds on the 1970’s terrorist events. Opening with a confusing but alluring contemporary dance set up, the film slowly unravels the build up of two German and two Palestinian terrorists who are quickly gathering intel, weapons and training to hijack a flight from Tel Aviv to Paris. The low key drama only begins to pick up once they arrive in Entebbe, Uganda and are welcomed by the deranged Idi Amin adeptly portrayed by Nonso Anozie. The couple from germany, Wilfried Böse (Brühl) and Brigitte Kuhlmann (Pike) both founding members of the leftist terror organization Revolutionary Cells don’t really come across as genuine couple, both seem quite aloof of the other but this film isn’t about them and often strays away from fact and into some fiction to prove some points although after watching it a few times i’m still not really sure what they are.

While in Uganda they start splitting the passengers up and making requests for money and the freedom of their comrades. Meanwhile many miles away Eddie Marsan, done up to portray a cool and collective Shimon Peres, Lior Ashkenazi as then Prime minister Yitzhak Rabin and some other Israelis clash over the illustrious demands and eventually the negotiations begin to falter and a sudden plan B is initiated involving IDF commandos. It’s at this pivotal point that the pace finally livens up and the dance set is completed and it finally all fits into place but it still remains pretty confusing as to why this method was incorporated into something that could have been an impressive showdown like Munich (2005) or Carlos (2010)

Everybody, this is a hijack situation. Nobody move!

Entebbe tries to be a thriller along with attempting to represent the human lives put at risk in risky hijacking but it tries to hard and missed the mark and sinks. Occasionally a hostage would spark up conversation, there’s one mood changing moment when an elderly Jewish woman reminisces on being separated before and Wilfried Böse looks reflecting on the events he’s created and how different they seem to be from his original target, but as nothing happens for many days the hijackers start to fall apart mentally, with Brigitte making a dead phone call to her father just to clear her head, it’s easy see this as a huge failed attempt which cost a lot of lives in the process.

Considering the worldwide talent involved this could have been so much better but it felt half powered all the way through, at first I really liked the idea of combining the artistic with history but I feel for this particular project to really get off the ground it could have done with more history, a touch more of Idi and less prancing, but sadly the brief touches of power and sentiment fade into a mush of pointless wishy washy drama.