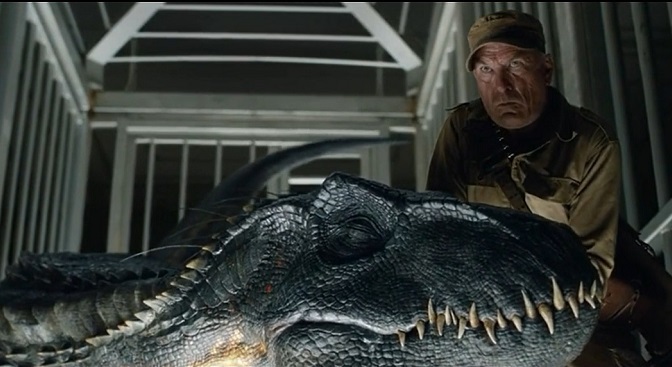 So once again we learn how dangerous dinosaurs are, and that includes mutant dinosaurs.. Because the old school variety just aren’t as scary as we thought… Jurassic World introduced a slightly different take on the “let’s make a theme park with dinosaurs”, Chris Pratt became a new lead with a group of modified raptors including his darling Blue. But the sentiment is quickly launched out the window for a fast paced non heel breaking action flick. All that pent up emotionalism returns in this even quicker paced often silly sequel.

Opening with a group of mercenaries trying to collect dinosaur bones to build more beasts, as their island is destroyed by a volcano, they are soon despatched by a few lose dinosaurs. A montage follows the world is divided, let the dinosaurs die or do they have a right to life and should we save them? Claire Dearing  (Dallas Howard) is determined to save as many as she can, after hooking up with Owen they are summoned to the mansion of Benjamin Lockwood (Cromwell), who was there when the first dino’s were extracted and with the help of his associate Eli Mills (Spall) they have set up a sanctuary. All Claire and Owen have to do it fly to the island, gather as many dinosaurs as possible and get them back to the sanctuary. Claire and Owen do their “thing” without their feelings get in the way too much.

Obviously as soon as they get to the island and meet the “Great White Hunter” Ken Wheatley (Ted Levine), and with him comes a giant  spanner that is firmly shoved into the works as there is another hidden agenda, but what on earth could be going on, who is he working for? There’s a lot of running and dodging of volcanic material in this act while the survivors do their best to round up the giant critters and dodging fireballs and molten lava.
It feels as if each new movie doesn’t feel confident enough that the dinosaurs aren’t enough to sell the movie and they keep finding justification of making new mutant creatures, but at the end of the day they are just using a dinosaur to sell a movie but there is a return of Dr Wu and a new deadly Frankenstein prototype monster.
It was brilliant to see a touch of English talent in the film, although the tone of the characters seems a bit of a sly slap, but at least they aren’t comedy sidekicks such as Smith and Pineda, who seem to appear when the mood needs to be lightened and then vanish when the kick is

Bayona managed to keep a similar flavour to the prequel, but this really feels like a mindless horror movie with lots of poor choices, terrible line up to plot changes and some extremely far fetched ideas but for something to switch off and be entertained by, it’s spot on if not a bit too long for what the average cinema goer would really be happy to sit for.

There are some nods to the original and most successful movie, the kid element returns as Lockwood has a ward, a young girl Maisie (Isabella Sermon), who runs around the mansion deducing the mystery before the adults and running into danger including the new biotech mutant dinosaur in the unusual dark gothic style scene of a creepy monster howling at the moon and peaking through her bedroom window, there’s a techy resetting the security the original fly and amber cane, and Jeff Goldblum, slightly more grey but making a classic speech at the beginning and bitter end as the film

lines itself up for the next installment, watch this space in 2021..

The pace is incredibly fast, as the film tries to fit a lot in, in fact it seems to shoehorn a lot in while neglecting the plot which makes the film feel quite dumb, but there’s just enough of a edge to make it exciting and captivating. But what the hell is being done about the pterodactyls and that big old fishy thing??