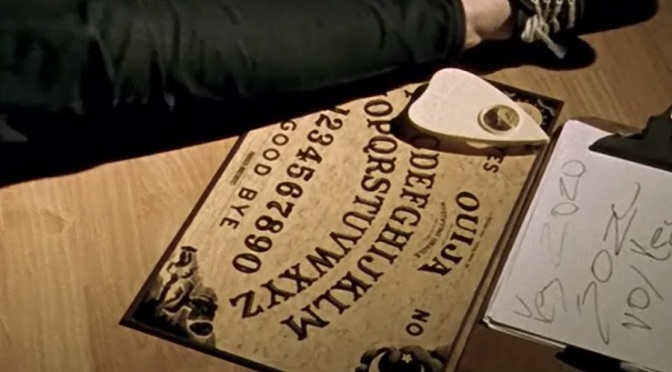 AKA Are You There?

As part of my Occult A-Z I have been watching some of the best and worst that cinema has to offer and pretty early on I was easily set on this being the end of the list but i’m afraid that the list will end on a low note.

I‘m a huge supporter of lower budget movies but what they lack funds they do have to make up with some passion, some drive, a bit of energy!! But this is little more than entry level horror, which is a shame as the whole Zozo mythos is pretty interesting and usually harbors a few jumps and sleepless nights.

Opening with a Conjuring style Oujia session which goes into array once Zozo’s name is spelt out on the board, then the participants are seen convulsing and screaming, the film changes mood and pace when the documentary nature takes over seeing a girl in “recovery” playing a soothing cello and recounting the events of her and a few friends going out to a remote cabin on an island to catch up, but the mood changes from light fancy to curiosity when a hot topic/mall goth chick whips out her ouija board on halloween night and starts to converse with spirits in the most inane and non eventful ouija session ever. All the wrong questions get asked everyone starts acting dumb in this cringe worthy segment of the movie, the following consequences are strange noises, and then the average haunting/possession stereotypes you’d expect. Sadly the film doesn’t go above and beyond to try something new for it’s audience.

Fluttering between indie horror and indie teen romantic drama, there’s a few delightful afternoon scenes where they are fishing and eating outdoors that wouldn’t be amis in a pop video but at night things attempt to get scary but the effort doesn’t pay off, I had hoped for a confident effort but in the end there’s a mad rush of phone lights illuminating figures facing walls and teens frantically running around screaming (a possible nod to The Blair Witch (1999)) but luckily I didn’t hold my breath for a good ending because this one isn’t memorable, and trying to blend Zozo with Pazuzu just seems a bit overkill when you can hardly deliver a semi decent Ouija horror in the first place.

Overall it’s a brave attempt but sadly this pitch just doesn’t pay off but I did enjoy some of the artistic and creative attempts at tense horror with limited budget, but I felt that the movie spend too much time on the fillers rather than the larger events. But it’s certainly something which should be considered if you’re ever going through the good and bad of occult and ouija horror.