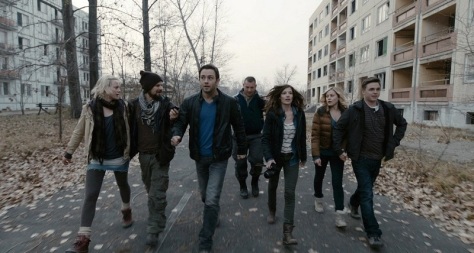 The first time I watched this movie I wasn’t overly impressed, silly me was sat there pffpffying at the screen cos I had seen better and scarier I was grown and I could deal with this, but then I started getting recurring nightmares and they were fucking awesome so I’m giving the film a mini thumbs up for that!

The entire film paints a pretty dim picture of the Ukraine/Serbia area, it’s monochrome greys and blue hues overpower the movie during its brightest hours, when a group of unattached youngsters manage to get smuggled into the no go area in the shadow of the Chernobyl disaster area. A young american couple are heading out for a off beaten adventure with the intention to propose just to warm the audience, while a scandinavian/Australian couple are just out for what they can find. After being stalled at the first checkpoint in the Ukraine they eventually go in through a rougher secret path that was discovered years ago by their local guide Uri. He assure them it’s safe, he has a geiger counter (so fuck your fears kids let’s ROLL!) but they are all constantly on the lookout for dangerous (glowing) wildlife and the military but they roam around the dusty ghost town in awe of the tragedy and well aware of the possible dangers. END_OF_DOCUMENT_TOKEN_TO_BE_REPLACED