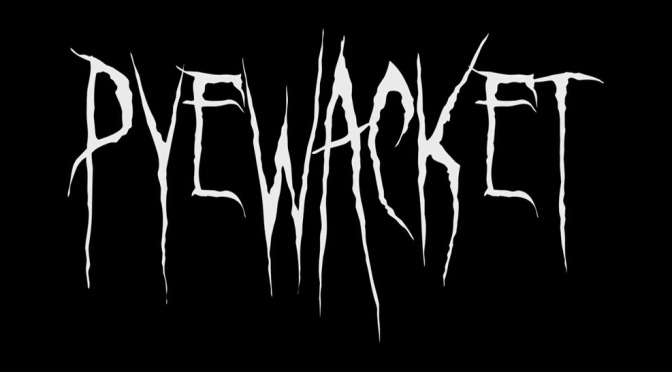 There are so many various types of horror movies some are deeply atmospheric, other rely on fantasy or special effects, some are purely creature features and scare it’s audience by showing graphic monsters that disgust. In more modern times we have a resurgence of found footage, torture gore and this new wave of cerebral horrors that often leave audiences left feeling let down, mostly due to the fact that they didn’t SEE anything. This divides horror fans, it’s much like that of Science Fiction fans who are now heavily reliant on special effects for their kicks as opposed to those who are leaning toward LoFiSciFi.

Now I didn’t do much research into Pywacket and I just assumed it was going to be a big beastie monster in the woods type of horror, but I got a very big shock, it’s more highbrow horror than I ever could have imagined. While it has some minor faults, it could have been done with some refining and maybe a little bit more research into the mechanics but alas it’s still a very well crafted horror that has the ability to really eat into the consciousness and makes you rethink a lot of your personal philosophy.

A teenage alternative chick, Leah (Muñoz) is dealing with all the normal pressures of school along with the demise of her mother after the death of her father. She’s struggling and her mother is literally falling apart, an often drunken mess that can barely get through a day without “help”. Meanwhile Leah clings closer with her occult loving black clad buddies, after attending a book signing of her favourite occult writer she discovers that her mother wants to move to a new home, Leah goes into teenage meltdown feeling that her mother is being unusually cruel and in her angsty grief she heads into the woods and calls up a demon called Pyewacket to kill her mother.

While waiting for many big reveals I totally missed the connections to Night of Demon (1957) but even this 50s classic had more “monster scenes” in it. This fact doesn’t make Pyewacket less interesting, in fact Leah and her mother really develop into brilliant characters, her mother beings as a total wreck and transforms into something more motherly but after the black magic hex, her character beings to develop some more.

Pyewacket much like Heartless (2014) and Unsane (2018) can be explained in terms of mental health, Even Freddy Krueger had his moments where he tormented his victims enough where people thought they were insane. So the relationship between terror and lunacy isn’t new, but once Leah is in too deep with her new demonic friend, the movie manages to play with that fine line between reality and fantasy until the very end, but doesn’t do that annoying trick of leaving it open for interpretation.

Once Leah realises her mistake, mostly from the disapproval of her goth gang, she does try to make amends, first by contacting the author of the book, who gives her very precise instructions on reversing the magic but Leah really fucks things up in that “bad movie decision kinda way” but it’s not until this point that the movie really starts to take shape and things really get eerie.

Adam MacDonald manages to make a lot of scares out of… well nothing, the creature, much like the Lamia from Drag Me To Hell (20??) doesn’t need to manifest itself to wreak havoc, but it’s presence is firmly felt and at times clearly understood. Somehow through very interesting camera work and superb sound effects, MacDonald has put a lot of effort into making very little seem like something truly dreadful, which is a powerful display of horror craftsmanship and the hard work pays off, as this film is intensely terrifying at times.

But despite all the talent and wonderful craft I did feel a little cheated, as I wanted to see more gore and “monster” but that’s just my personal taste. There were some gripping moments, especially when Pyewacket starts to take shape, not much is mentioned about what or who Pyewacket is, so there wasn’t much anyone could do to look out for “it”