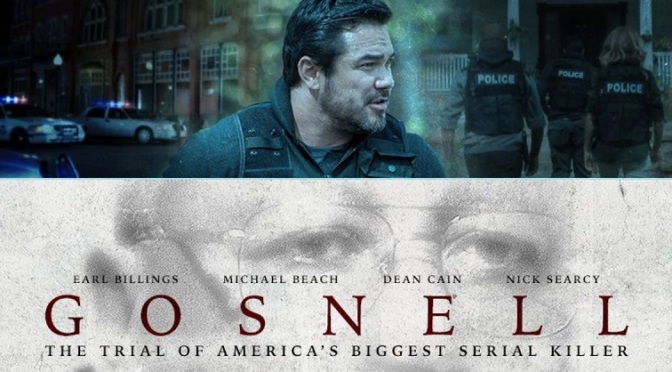 When I saw a movie claiming to be about the most prolific killer in America and with a name I didn’t recognise I had to sit down and ponder if I had lost all of my Serial Killer Groupie points.. The story of Dr Kermit Gosnell was something that cropped up but not something I had really ranked in my personal Murderpedia so I allowed myself to go into this blindly and see what I can learn from this TV movie production that claims to be about the trial but hardly sees a courtroom.

Old school Superman star Dean Cain heads up the police force involved in this publicly fan funded drama, his confidant and co star is the spaced out Alexis ‘Lexy’ McGuire (Morris) who plays a pro life mother and prosecutor who sturggles with the abortion aspects of the case and has to be the only TV lawyer who displays so much hardship in taking on a case, the stereotypical stance is that they are all heartless beasts.

The sensitivity of the movie possibly comes from the crowd funding that supported it. Much of the movie is set out to paint a thinly layered image of a doctor who believes he’s innocent and totally deranged rather than delivering a wider perspective of the case. Originally it left me needed to do some research as I had a nagging feeling that a lot was left out due to the hidden agenda. But in the bigger scheme of things and in comparison to other Serial Killer films, politics rules and the portrayal of the killers and victims are pre described and often far from the beaten track.

Earl Billings seems to come across as a variable Kermit impersonator but I will honestly have to find real footage to confirm, but the narrative seems obsessed with details how sick this doctor’s actions were and how stressful the case was to a lawyer who has chosen the pro life path and has hundreds of kids.

It’s a fairly deep drama that does get into the gross, especially when they first meet Kermit, who’s abortion clinic is littered with foetuses and he handles body part, snacks on food and seems more concerned with his terrapin than the tens of law enforcement officers who seem to have crowded his office. It could have dropped the politics for something more entertaining but I assume that was the point of funding this particular story, so it achieve it goal but it doesn’t make it a better True Life movie when the agenda is so evident and skewed, and most of the details comes from hear say of nurses and assistants who were clearly ready to pass blame. Not the most gripping thriller but definitely given me something to research and catch up on. America’s biggest serial killer? I’ll let you be the judge of that.