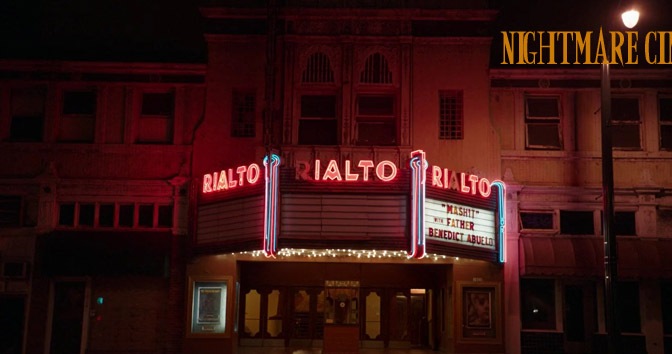 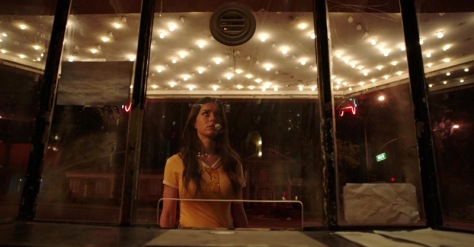 Anthologies are an important part of any genre but their significance to the world of horror is vital for getting a collection of directors to get those shorter, sometimes more obscure ideas out there. Horror is usually just a concept, Short Stories to tell the dark is a great example of a very short one page stories that kept a lot of kids up at night and is about to start scaring them again with the upcoming horror with the same name by Guillermo del Toro.

Every era has its highs and lows, from the golden era of Amicus to the more recent VHS and Southbound movies, we’ve also been treated by cult classics like Creepshow and Body Bags, the list really does go on. A lot of these films really took themselves seriously, trying to deliver something unseen, new and unbound, but most of this is set aside for a slightly retro kookie mish mash of bizarre horror and a few giggles in this bizarre anthology, partially starring Mickey Rouke in the wrap around.

Nightmare Cinema is set around an out of the way cinema called the Rialto, run by the master of nightmares Mr Rouke, the basis is an unsuspecting victim wanders into the cinema, once seated they are forced to see their worst nightmare, but the aftermath is slightly different for each character, this was a bit unnerving for me, I like a good routine in an anthology.

The Thing in the Woods (D: Alejandro Brugués) – the film opens up with a the geekiest of all the segments, this film relies on the audience being aware of horror stereotypes and cliques, it plays on all of them, but adds a twist. A group of friends are spending good times in a cabin in the woods, an axe wielding maniac puts a damper on their fun, but he has a strange reasons for his killing spree. It’s incredibly tongue in cheek and was quite off putting for the intro to the movie which seems to have put a lot of people off, but if you decide to carry on… 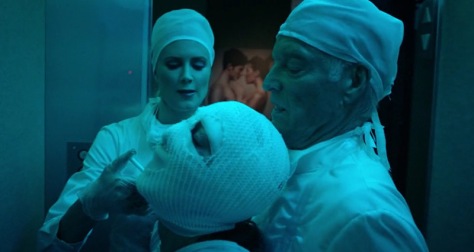 Mirare (D: Joe Dante) With a lot of modern horrors there’s a touch of social media and “today” problems, this segment is one of those shorts, a woman with a scar on her face is engaged to the man of her dreams, who loves her no matter but is willing to pay for surgery, she jumps at the chance but we all have a different idea of beauty and her charming surgeon (Richard Chamberlain) is just as twisted as the commissioners behind her surgery.

Mashit (D: Ryūhei Kitamura) Things get a bit silly again in a demonic possession horror, played out in a monastery a father and his favourite side dish nun managed to finish a round of hide the sausage in order to help save some kids in their care. There’s a lot of slashing and flying body parts which is unusual for an exorcist style short movie but it gets the job done. 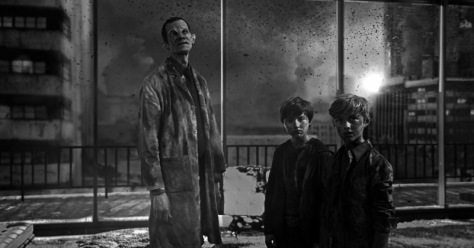 This Way to the Egress (D: David Slade) This is the segment which saved the entire movie for me. This black and white piece is very different from all the other more traditional styles of horror that we’ve seen in Nightmare Cinema so far. A mother is waiting in a doctors surgery with her two boys when the world around her starts to appear different. It’s a wonderful story about perception, possible ascension or mental health, it’s up to the viewer to decide, the film has hits of SIlent Hill and Videodrome (1983) / eXistenZ (1999) in it and for me is the sole reason why I rated this above the average mark. 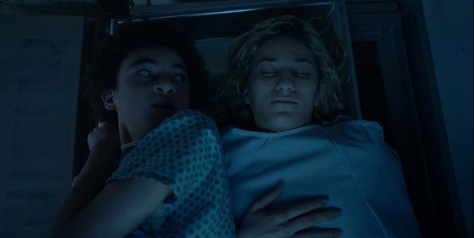 Dead (D: Mick Garris) Sadly the film ended with this chapter which is more of Twilight Zone styled story. A young boy and his family are attacked and shot by a grizzly carjacker. Waking up alone in hospital he soon realises that he can see dead people, (sound familiar?) He’s not alone he befriends a girl who can also see the dead (I guess I’m the only one who can’t) but soon it’s the living who becomes a danger to him when the carjacker returns to make sure no one talks!!

While watching the movies it became painful and I really started losing hope until This Way to Egress cropped up, an out of left field segment which helped show that this anthology was successfully trying to display different styles of horror, something goofy, psychological, supernatural and something with that touch of human kindness and a happy ending. Mickey Rouke as the projectionist was an interesting choice, I do love how he throws himself in any role, and he’s okay as this king of nightmares, for any other anthology you’d expect someone more sinister and charismatic but he embodies this retro inspired collection of movies that for the most part are fun and scary. It’s been a while since a wrap around had a single host, but it was certainly an enjoyable feature when Peter Cushing took on the role in Dr Terror’s House of Horrors (1965) or even the sinister robed Keeper in Tales from the Crypt (1972).

I felt that it was a bit of a challenge to go through nearly 2 hours for 5 shorts, the films were pretty lengthy for what they are, there seemed to be no urgency to get to the point, luckily we have Deathcember (2020) and ABC’s of Death (2012) for such shorter on point films so the anthology can fit in so many more stories.