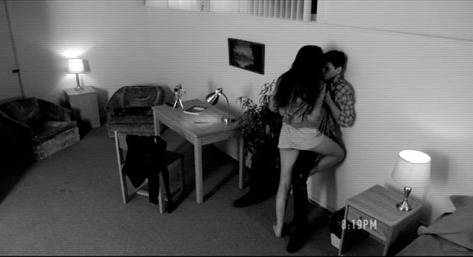 Demonic Possession Found Footage can almost be defined as its own sub genre as there are so many movies on the subject now. Through this process there develops a hierarchy, at the top are those trailblazing movies which introduce new fears, and thrilling viewing experiences, the lower half tend to be regurgitation of the same old ideas, but with slightly different titles, but for me Inner Demons sits neatly in the middle but just needed some grit and conviction to really earn those brownie points.

Seemly inspired by a host of other possession movies and tales of strange drug addiction and habits, this chilling movie lurks into the world of addiction and the touches on the greed of television producers who might try to interfere with situations to make things more sensational but it’s not a major part of the films message..

While this mix of drugs and demons isn’t necessarily all that new, in the Possession of Michael King (2014) he’s slipped some acid and puts down a lot of events to the trip and subsequent flashbacks, but it’s never been the main premise of movie which is quite interesting but while the ideas are clearly visible the execution is a bit dull.

A  television crew are following Carson (Vosburgh), originally an wonderful straight A, student who’s recently become addicted to heroin. The crew document her addiction as her family attempt to save their beloved daughter, but the crew, especially Jason (McClellan) who becomes attached to the young hot topic gothling, start to notice other events that suggest something more anti religious is going on, eventually they get her into rehab but is it really the the treatment that she’ll need to save her.

The found footage horror scene has a particular style which his film fits right into, the story is pretty solid, there’s the odd goof and plot hole but sometimes this can’t be avoided, but what in between the shaky cam and jump scares there’s just a major let down with the constant inaccuracies but this isn’t just for the indie scene,  even the larger movies such as Unsane (2018) have messed up when it comes to institution processes it’s  messy and unrealistic and sometimes these distractions can really bring down a movie.

Seth Grossman has really dug deep into the after effects of this idea but it would have been really interesting to see the things from the beginning.  In the meantime it’s still has a healthy number jump scares and some chills and thrills but these are greatly outnumbered by all the typical cliches that water down the new elements and turns the project into the mundane and not something to keep the average horror fan up at night.

Personally I would have like to have seen more effects of the possession and drugs, while Vosburgh did a good job at being a stereotypical possessed teen, she didn’t really come across as a hardcore drug addict, it would be great if it could have done for the drug possession genre, what Rec (2007) did for the religious zombie demonic entity genre.

It’s okay but nothing to write home about.