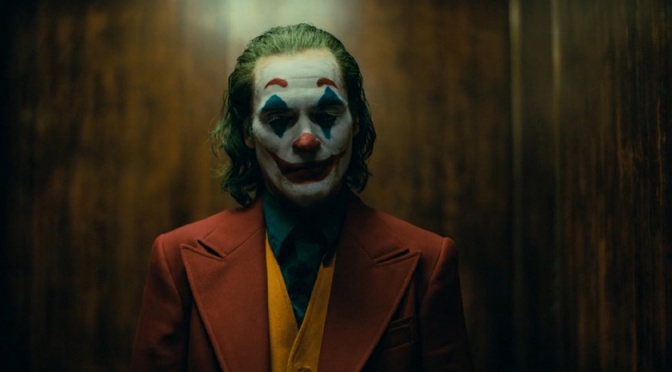 Unlike a lot of action films that are based on comic characters. Phillips takes a totally different stance on recreating his solemn and realistic Joker in a studious drama focused on a downtrodden clown on the verge of his magnum opus. Last year we had a solemn Suspiria (2018) and now we have a courtly Super Villain, not just because everyone really loved Suicide Squad (2016) but a handful of grown ups wanted something more tangible and .. grown up!?

Generally the origin of the Joker is common knowledge, it’s been revisited many time in various graphic novels and comic series of the the years, but this is the first of a new series of DC comic remakes based in a more plausible world, and this chilling story for Arthur Fleck is outstanding, not only for the new birth of the worlds most favourite bad guy but it stands as a benchmark of Joaquin Phoenix as a truly versatile actor whose masterful adoption of characters that purposely don’t gel with audiences, only make them more lovable. It’s pretty easy to see this as the DC version of You Were Never Really Here (2017) but maybe in reverse but it’s just a tad darker and outlandish with crazier people involved. But in all honesty I wouldn’t want to blend the two films as they stand alone in their own glorious and unforgettable rights. END_OF_DOCUMENT_TOKEN_TO_BE_REPLACED