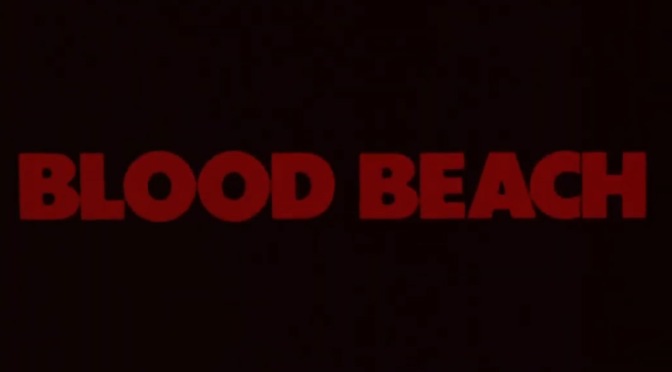 We all love spending time on the beach when the weather is good, until it begins to consume us! Which is the general gist of Jeffrey Blooms stand out low budget horror which aims to make us fear the sand as much as Jaws (1975) made us fear the waters.

For the short running time, Bloom wastes no time getting to the gory basics when the first innocent victim is taken within the opening scene, where a elderly dog walker is sucked into the sand screaming in agony, never to be seen again, it’s a desolate beginning, leaving the scene with a dog barking at the sand in desperate search of his owner..with this deadly foreplay the characters are slowly introduced, sadly the main cast aren’t that strong but the supporting actors really stand out mostly the legendary John Saxon who’s character, Captain Pearson, takes no bull shit and has a back up of Sergeant Royko, (Young) who plays a petty skeptical officer who is absolutely no help but does liven the movie up with his jive talking insults.

Overall the murky mystery is quite alright, there’s a dynamic duo David and Marinara (Caulder and Hutton) who are piecing together this unusual mystery while falling in love and an unprepared police force who spend as much time working on the case as arguing with local politicians for funding. In between nasty death scenes, there’s random news covering which could have done with a Vorheaven media twist. The creature/s involved are fairly new, but what I found to be more interesting is the obsession that the medical officer found with other creatures power and potential. Dr. Dimitrious (Gierasch) was almost on par with Brad Dourif’s strange doctor character in Alien Resurrection (1997), both seemed to have a hard on for this alien life form.

On the downside, there’s a lot of blurry footage of the creature and at times it appears that that Vaseline on the screen for that added blurry/dreamy effect, it’s cute but it doesn’t help when the audience want to see this gruesome sand dweller, no matter what the grade of the effects, this is what we love and I feel a little robbed by it. but apart from this misdemeanor and a hurried approach, overall it’s quite a brilliant little creature feature.