Death Ship could easily be labelled as another prime example of how the horrors of World War II still plague the minds of modern man, with acts so cruel, barbaric and insane that the strong cinematic belief that this pinnacle of human shame has the power to infect and infest. Time and time again movies find the dark depraved experiments and human torture so hard to portray on screen that it’s analogiased as a demonic haunting, let’s face it, witnessing world War ii is like peering into vignettes of hell.

I wouldn’t want to say this was the blueprint for future ocean horrors but it so easy to see its effects in the tangled mess of Triangle (2009) and the palatable Ghost Ship (2002) the mechanics of this salty horror have more in common with Outpost (2008) and Christine (1983) and in my humble opinion Amityville (1979).

What starts out as a pleasurable cruise ends in distresses terror when the ship starts to sink, a handful of survivors manage to find some safety among the debris until the morning when they discover the captain half drowned and drag him into the makeshift raft.

Within moments and out of nowhere a giant dark ship silently creeps up behind them and they attempt to board, but even this simple act of self rescue is thwarted by what seems to be a rotten ship as the stairs break away after the women bored and the men are left stranded, eventually fighting their way on board the treacherous ship, but it’s not until the next scene when the true intentions and abilities of this mysterious ghost ship coming to play. One of rescued stage performers is picked up by the foot by one of the ships cranes hung overboard and lowered into the water much like the tarot Hanged man, he struggles while drowning, held under the water with his comrades screaming and powerless to help him. But they are still in belief that it’s all down to the state of the ship and put it down to a tragic and unfortunate accident. What a magnificent opening to a movie.

The group tries to settle onboard the rickety abandoned ship, Richard Crenna starts to become a leader of the group but a little Victoria Burgoyne plays a pretty active role jumping sound the saving lives and being a total Wonder Woman. There are a couple of cute kids on board a brother and sister who get themselves into all sorts of mischief but luckily don’t witness the worst gore in the movie.

Like Amityville and Christine that came before, when object is haunted or possessed by something evil, there’s always somebody who takes the darkness in on a personal level, in this case it’s the season actor George Kennedy at face value he seems to be a man who was once in control of a grand powerful ship and after a series of tragic turns, he appears to be trying to regain his previous status and take control of this ship and be a leader once again, but it’s is never that simple in a ghost story and soon the dark connection between the ships bloodlust and the captain start to unfold. 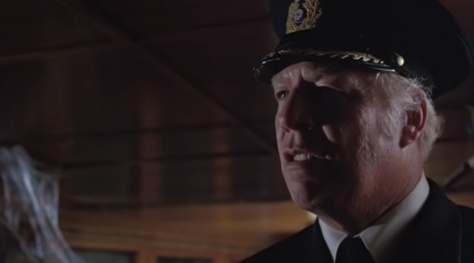 The long looming corridors and cobwebbed features really aid the creepy atmosphere that the survivors have to stumble through. The constant creaking and inhospitable surrounds are ideal for this type of cold type of seething story. The ship does seem to take on a sadistic personality, it’s never really amped up as much as it could be, with Christine we knew when she was angry and hurting, but this ship, is in a different mode and that’s to kill and consume, this fair ship just wants blood and like a shark when it senses a kill it starts it’s warm up process, jumping into gear and grinding when the excitement kicks in that it will have more blood to feast on.

The pattern repeats until the makeshift crew start to break down and then emerges, Alvin Rakoff most imaginative scenes, the wonder woman stylized character goes for a shower which turns to blood (fake blood but the actress was told it was real to enhance her already energetic performance) and she starts thrashing around in the now locked shower while the radio blares out one of hitler’s speeches, her lover smashing against the glass, he then goes for help and stumbles on a projector showing third reich propaganda which despite smashing the machine continues to project on the wall and his body as he slowly becomes unhinged, this psychotropic meltdown is just what the film needed to give it some energy before the final showdown and really adds a trippy edge to an otherwise slightly cumbersome horror. A metaphor for the exposure to the violence and it’s supposed ability to drive people insane but it brings the mania together as the energy finally picks up.

There’s a touch of real ghostly moans and whispers come from the corpses below decks of the Kriegsmarine, their charred and rotting bodies still going through the process of being tortured, and by the time the strongest survivors find the crew it’s time to abandon ship. I can see audiences weren’t scared by the adventure, the pace drops off now and again and the effects are more to gross people out than to scare but with a touch of imagination I really enjoyed the film. It’s an interesting idea but one which wasn’t executed with all the veracity that it could have, but it seems to have led to a number of lost at sea ghostly films so it can’t be all that bad can it?