We who are about to be scared Salute you Argentina!! Thank you so much for breaking the rules and making a truly terrifying movie!! (you see what I did there?)

I get really annoyed when people give up on a genre, be it music, art or indeed beloved Cinema, for the amount of media being produced you can be guaranteed to find something to tickle your fancy but the only thing stopping you from finding it is effort and if you’re searching for that next buzz, then I always suggest that you try something not aimed as the masses for profit.

After strange events start in a happy and unassuming neighbourhood in Buenos Aires, the police and investigators are baffled, but one officer takes a bold step to bring in a group of paranormal researchers to help uncover possible surreal causes. The events are pretty grotesques and highly strange, one case involves the corpse of a boy who was accidently killed, that finds its way back home, but while he’s still obviously dead there’s some strange “activity” around his body, he seems to drink and eat when no one is looking, carrying on like a normal, rotting little boy. His mother is suspected of being an unstable emotional wreck, did she dig the child up? if so, why is she so scared of him? Other events involve a strange shadowy humanoid figure that seems to cohabit within a man’s house but once he goes missing his paranoid delusions are thought to have some truth.

The team sets up various equipment, cameras, video etc with the idea of spending the night in the property and one across the road to document what’s going on even though the experiments are sketchy, as an audience we all know that splitting up is never a good idea but they have communications.. .. *sigh* At this point it’s easy to assume what will happen next, but nothing about Aterrados is too obvious for too long. The film digs deep into the hellish night of investigating which basically sees all the most terrifying moments of any creepy story topped up with all the most dangerous and bizarre SCPS sets loose in the neighbourhood.

Demian Rugna really captures a consistent creepy effect throughout this pretty scary movie, a lot of things happen in the peripheral and he’s not afraid to flash up monstrous creatures when he needs to, but the magic works in the built up tension and off kilter jumps, that aren’t presented in any typical fashion and the offset approach really works on unnerving even seasoned audiences. Somehow through the clever editing and steady build up, Rugna makes us afraid of monsters under the bed, those shadows you catch in the corner of your eye and the unknown, there’s a huge sense of not feeling safe at all by the end of the movie. 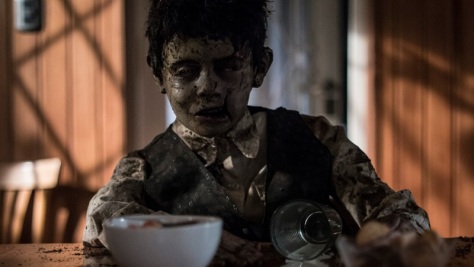 For me it’s the perfect adventure in which only good things come. I love the slightly Lovecraftian aspect of otherworlds and beings that slip in and out of sight, unknowing can be a powerful tool if applied and investigated as perfectly as this. Rugna looks deeply into the abyss and then tumbles in bumping against every monster and fear on the way and reports with some accuracy, sometimes films fall short, giving it’s audience a hint of what is there and allowing them to join the dots, this doesn’t work, we need enough to ask questions and that’s when the fear works.