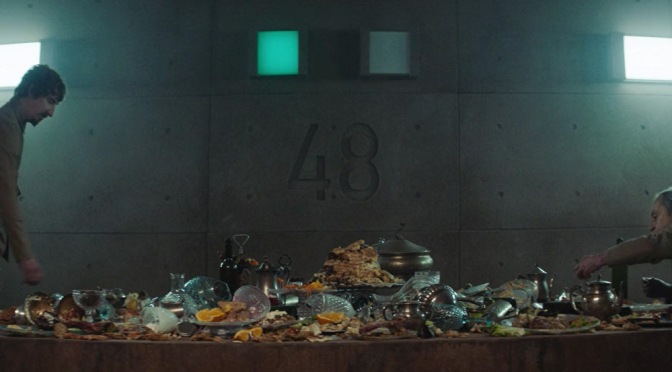 It’s a popular trend for movies made for a more astute audience to often hit the ground running, chucking it’s characters and audience into an odd situation and assuming that grey matter will get them through the fleshing out of the plot, this is so welcomed than a third of the movie being taking by the director hammering home what they want the audience to think. So after watching a Michelin style kitchen prepare perfect foods, Galder opens with the lead Goreng (Massague) waking up on a bunk, on a platform with a strange man who keeps saying obviously.. there should be a warning to buckle up because things are going to get strange, violent and incredibly deep.

Goreng, a rational thinker and all round nice-guy, wakes up on platform No. 48, his elderly slightly aggressive roommate is Trimagasi (Eguileor) briefly lays out some of the basics, there are believed to be 200 floors in this Vertical Self-Management Centre. A five star cuisine ladened platform moves from top to bottom, stopping for about 2 minutes on each floor for the inmates to eat all they can before floating down to the next level and so on. Simple, all you have to do is exist, eat, and before you know it, your time is up. If only things were that simple.

You can’t withhold food, if you keep any for later you’ll be boiled or frozen to death until you discard the contraband Goreng finds this out when he tries to take an apple for later, a man eating a forbidden apple, this reminds me of another story??. No one wants to play fair, people gorge themselves leaving none for the floors below, the inmates spit, shit and break glass into the food. Each time some brutality is revealed Goreng dies inside a little more, the animalistic behaviour is too much for him to bear, but he toughens up or is he simply becoming a team player?

Goreng begins to think along the same lines as the audience, what happened to the lower floors? If you wake up on floor 3 you’re in for a feast, but if you’re on platform 132, then things are about to get nasty..Isn’t he lucky that he’s so high up the food chain? His rose tinted dream is about to be crushed, as is discovered every month, the pairs are shifted to a different platform and possibly with a new cell mate as people expire. That’s when he begins to realise that the copy of Don Quixote that he brought with him might not have been the best choice as his celly has a self sharpening Samurai Plus knife.. Despite his urge to get through his time as peaceful as possible so he can crack on with his degree, he suddenly realises this is a very dangerous place for a reader.

Awaking on different platforms each month, he encounters different problems and people with different keepsake objects, some brought money with them, baseball bats and all types of weapons, no one else was naive enough to bring a book but is this a sign that he’s different from everyone else apart form whoever brought a blow up pool with them??. The heavy handed director Gaztelu-Urrutia nibly takes us deeper into the nasty hellscape as well as further down the grotty rabbit hole, with each new chapter the moral standpoint shifts in this subterranean world of misery where no one has any control, but the only insight into the powers that be are scenes of the chefs working on the food, being scolded for one minute hair being in a desert. These scenes really bring home the short favourite of mine called Next Floor by Denis Villeneuve.

During one of their binge sessions, Goreng and Trimagasi encounter a strange woman on the platform, who’s searching for her daughter, each month she travels the platform violently attacking anyone who threatens her until she finds the child, but can a child really be inside this facility? It begins to raise questions as to why people are in this centre, what has happened to society for this to be a justice? Trimagasi is in for manslaughter but Goreng is hoping to get a degree, so this is his entry fee? Through a handful of flashbacks we see the administration interview documented, including him picking his favourite meal.. which becomes his nickname, Escargot.. yum yum.

There are 3 kinds of people, the ones above, the ones below and the ones who fall.

The monotonous grey walls and clunky music which feels like it’s being made by chefs banging on pots and pans, the doom filled foodie atmosphere really helps the audience zone in on one or two characters at a time while remain focused on the food, there’s nowhere for them to hide in the open cell, much like the Cube (2009) the acting in this style of movie has to be spot on and Ivan Massague is adept as his character twists and turns, his shitty luck forces him to do things that he previously thought impossible. Goreng begins to become his own Don Quixote and insists on being the hero of his own story. At some point he’s paired with an ex administrator and her dog, and a burly Black man, Baharat (Coka) but he does devise a plan to fix the machine and it all centres around a Triamsu..

The breakdown of the movie becomes like the Raid (2011) but with the desperation and social misconduct of The Snowpiercer (2013), Goreng takes on the system, head on without much regard for his own safety, by this time he’s a broken man, both mentally and physically, he’s talking to ghosts and determined to make his point, the point the movie has been driving at since the first scene.

Everything is a metaphor on the platforms, numbers also become a huge factor for those reading between the lines, with biblical proportions towards the end. It’s no big secret that this gloomy tale is based on a real issue of sharing resources, and it all comes at a time which should make more people ashamed of panic buying their way through all their local supermarkets just before the lockdown. But it is more about those above and those below and people finding themselves in different places throughout the course of their life, now we’ll just let that all sink in.

There’s so many great ideas that some whirling at the audience at ferocious speed, you’ll likely find yourself glued to the screen and gasping, it really is unbelievable just how bad things can get although the atmosphere physically and spiritual get darker until the final scene it won’t give many the kick they were hoping for after this atrocious social experiment, but it pulls the film together on a sombre tone but one with some hope. It’s going to annoy a few but I think even those who are butt hurt by not finding a solid conclusion can still agree that the journey was awesome.

The final scene of the movie is incredibly bewildering, I had to play it back to really understand it’s message and the consequences of the final epic journey, I think I’ve made some sense of it with my own beliefs and deposit its openness I think everyone can take something different home because we’re all on our own platform.