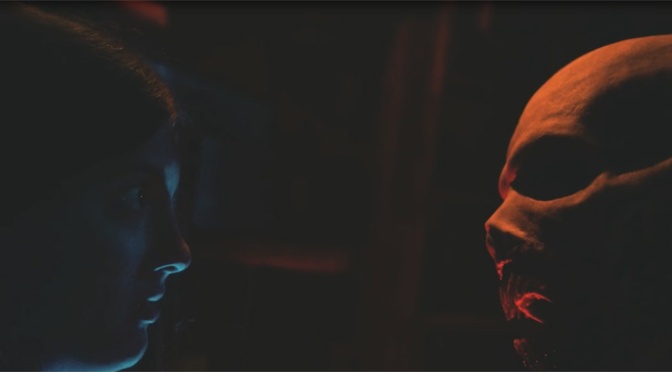 For a first time full length feature, there’s a lot of potential here, great believable character creation and development, an interesting narrative and some sterling cinematography, however there’s just something amiss with Dall’s creepy drama. Firstly it can’t make up its mind if it’s a horror movie with kids, or for kids…

Dall has a gorgeous set up as he hurls his cast back into the early 1970’s, opening with a father an son who are on the road to attend an alleged possession case, while recording their findings they are convinced something demonic is going on, and attempt an exorcism using an arcane tomb, as with any credible horror, things go terribly wrong but the tape catches it all including the demonic forces and seems to hold on to them.

Years later a young girl Mary Roe (Daniels) after having gone through her own personal tragedy finds the tape player in a thrift shop and strikes up a bargain more deadly than she can imagine. The film flounders around the lives of Jessica and her two best friends, Sam (Chandler) and the mini tank girlesque Cheddar (Campbell). It’s prom season and they have a cool science experiment to work on, for now it’s a matter of rigging up a potato powered lamp. Mary’s household is stressed, she strains to bond with her father but whatever has occurred her friends are ready to stand by her side. But their friendships are about to be tested. Mary plays the haunted tape player and it cuts her, once those drops of blood land on it, her not-so-happy home and the entire town start to experience a strange demonic hauntings and symptoms but the clever entity/entities which have an aversion to light but we already fear the dark, maybe this is why.

First you hear them, Then you see then, then they reach..

Dall chucks in random scares throughout the movie, most seem to be really pointless as the cast just shrug them off, shuffling noises in the dark, a mysterious girl rips her face off in a dark , but no real reaction until later on in the movie. Cheddar remains totally adorable though and there are a few giggles to be had between the friends. At a pivotal point in the movie Mary’s mother has gone insane, her father has been arrested for murder by two local cops, named Kevin Smith and Jason Mewes, ala Jay and Silent Bob (lol not lol). and the friends have done some digging after hours at the local library, as the librarian is also an expert in demons, possession and has a great secret room where she likes to hang out with her candles, haunted items and a bag of weed, this lovely flame headed charmer who offers to be Sam’s sugar momma, and Cheddar really steal the movie for me.

There are tons of horror movies that feature kids and they remain really scary, Pet Sematary (1989), The Gate (1987), Child’s Play (1988), but They Reach falls into the category more akin to Explorers (1985) or ET (1982), it has a retro wonderment about it that allows the director to lead the audience on an adventure skirting around the fear factor which isn’t necessarily a bad thing but when you’re sold on a horror you expect a horror. There are a few things which are creepy but on the whole the movie dares not to be really scary. I think maybe it just needs to be looked at as a creepy drama. A lot of the fears seem to come from childhood, a fear of the dark after all it’s where the monsters live, creepy hands which come out from under furniture and cars, by the end of the film, after the abysmal dreamlike ending, the whole thing feels like a compilation of “Deep Dark Fears”.

They Reach has a wonderful atmosphere and authentic 70’s feeling about it, Dall really takes time to describe the era as if looking back through a personal photo album, and you really do have to look through the movie for little quips, like the comic by the bedside and the cute poster of Ripley and Jones, but it’s not just supposed to tug at the heartstrings, movies are supposed to entertain but however much I enjoy the atmosphere, trip down memory lane, the great characters and concept, it just felt it was a bit too whimsical in its approach to being a horror movie and really let itself down with a bullshit ending, still it’s a wholesome way to spend an hour and a bit and I’m likely to watch it again…