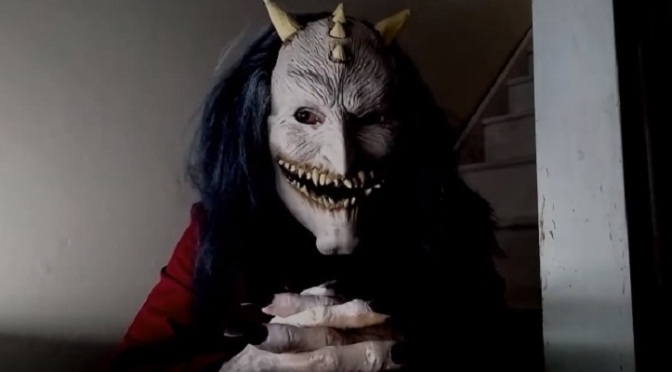 Erik Woolcott’s spellbinding tale follows a man who picks up where his late father left off, with an investigation into something that mankind should not know.. or even attempt to learn.

After being asked to pick up the abandoned research papers he finds himself lost in a mental void, a wilderness of mysteries, Woolcott uses a really muted pallet in two prime settings to keep everything shrouded in mystery, like everything is happening in a constant twilight.

With heavy HPLovecraft roots there is a coolness to file and how it unveils its origins, but Gilberto Nué acting is paramount to it all working so well.

The Jigsaw has a lot in common with an amazing episode of Shadows At the Door called Winters Wings (https://shadowsatthedoor.podbean.com/e/episode-five-winter-wings/) so go and check that out and leave the boys an Earl Grey.

A man wandering around a market is insistent on purchasing a Jigsaw from a very dodgy trader, after a dodgy transaction he gets his new treasure home and on a dark and stormy night he begins to put it together… only to discover a bone chilling anomaly at midnight and just before putting in the last piece.. .

It is indeed beautiful, the soft tones and texture in and around the characters, all awash with sepia tones makes it feel very old and homely. The characters are a bit heavy for what is needed but with that cracking twist at the end it works all too well for The Al-Safar Bros. Do you ever go thrifting and wonder what secrets you might be bringing home with your new found treasures?

Within the opening minutes there’s mention of a full moon, so without all the extra gumph in the title it’s apparent that this is gonna be a wolf story, but how are things gonna turn out.

The film opens with some friends travelling to a remote location during the full moon season, although they already know there is a beast out tonight. Bill Oberst Jr S tale is of a father and son bond pulled taught by the power of the full moon It looks and feels just like a full length production but it’s a bit laboured but has a great ending.. one of those gunshots in the dark and just enough time to ponder who was killed..

No surprises which theme I’m sticking to with this film, what happens whenever we use the word moon!!??! Scott Hamilton’s dark and torturous short movie is filled with gore and violence as it slowly produces a really powerful narrative and a really interesting transformation scene. A man is tied to a chair in a basement and beaten by two men who are searching for his brother, after getting what info they can out of him.. he begins to change.

This thriller is suspenseful and filled with screams and blood like all good movies should be.

A tailor gets an emergency call and with a low battery he leaves his studio but the coat he’s making drops off his mannequin, but this isn’t the strangest thing that’s going to happen to him tonight Great talent with a camera and every growing atmosphere that builds and keeps on giving some really crazy thrills, with some connections with that angels episode from Doctor Who. but this is a brilliant little horror from Scott Dale.

The Beast of Gevaudan

Not sure why this one seems to be doing the rounds again but this also popped up on a podcast I listened to this week but I forget which one! The Beast has spurred two amazing movies, Le Pacte Des Loups (which is one of my fall time favourites of all time) and Romasanta which goes into more of the “facts” of the story as covered by the darling Dr. in this creepy video.

The Dr has been willing to treat us with a longer classic story, written by Michael Joseph. If you’re a big fan of classic stories you’ll see how these wonderfully well written stories have influenced modern horror.

This really is a treat on the channel to date and worth the few extra minutes.

Murder as the Ostrich Inn

I have to admit that this is one of those little English murder stories that I’ve never heard, but it’s like the HH Homes Murder Hotel but just done in a proper English qaint fashion!

I haven’t covered Trailers That Small on here since adding youtube videos to my lists, I do apologise Skunk Ape, you are still the No.1 best Ape in town, love you long time.

You’ll find quite a back catalogue to get through on the channel, a unique blend of mashup trailers that are 100% best taste exploitation.. really go check me out, nothing dodgy going on here, all true stories.

This week I’m covering the Grizzly 2 trailer which has an unknown connection to Queen and Freddy Mercury didn’t you know? I didn’t.. and now everything makes sense!

Also check out the Ape here on Twitter, https://twitter.com/TrailersPU

Hopefully you enjoyed this week’s list, if there are any short movies that you can recommend please let me know.

To view my list of favourite short movies check out this link and to view the archive of all short movie roundups check the link here.