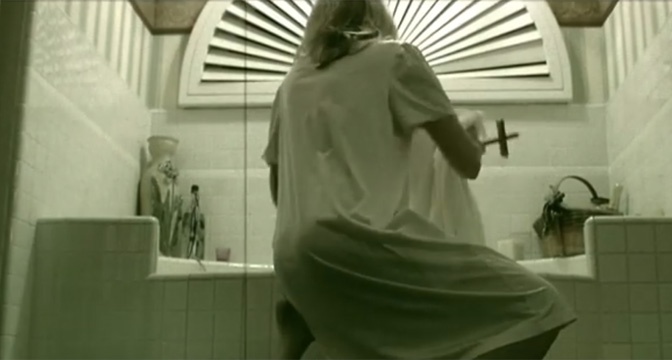 An impressive Ghost Hunter is paid to conduct a paranormal investigation of a supposedly haunted home. While she’s accomplished, the patron has insisted a small team work with her including a cameraman and local reporter, then a spiritual advocate from the church turns up, an afterthought but she’s essential to keep balance.

Opening with a dark prequel into the history of the house, assumingly filmed on an old time camera digital blemishes and the rattling of a home recorded emphasizes the age of the clip we’re shown. A woman places a newborn baby into a bath and begins to fill it with water, retreating to the bedroom she shoots herself, if this distress isn’t enough to create a haunting I’m not sure what is. But who’s filming? Actually no one is, it’s just a style to get across that this is history but it fails to make any logical sense, and it’s these mistakes which begin to ruin a mediocre film.

Re opening with the hunter, Carter Simms’s (Tindall) on her scenic road trip to the property, covered with an overture of her diary entries, the film is bustling optimism. With a massive change in style the movie plummets to the ground with a dry feeling, the voice over is over and we’re in the realms of boring film making only now. Carter promptly given the keys and introduced to her “crew” and later a slightly unusual highly religious skeptic joins them, they soon get to bonding and investigating, setting up night cameras and voice recorders.

Carter has two theories about Ghosts, they are either residual memories being replayed over and over again or the dead consciously trying to make contact. Either way she’s determined to prove that they exist in one way or another and unfortunately does so but not as you’d expect.

It’s surprising that with all the episodes of Ghost Hunters and a million paranormal Activity flicks that this movie makes so many dismal mistakes and fails to offer any genuine scares. Even for the lower budget horror flick it just needed a touch more enthusiasm and could have avoided becoming an incoherent jumbled mess that relies more on the audience’s interest in the mystery surrounding the home more than being spooked by scary ghost sightings.

The group dynamics build up and break down as an imposter is sniffed out, but this is the most dramatic aspect of the movie so keep an eye out for the little signs which lead to the twisted mystery behind the cause of the haunting.

In my honest opinion if you want to see a movie which gets this right, it even has a similar title, check out Death of a Vlogger (2019)

Death of a Ghost Hunter (2007) – A Paranormal investigator is employed to investigate another haunted home with the intention of finally proving that ghosts exist. Low budget messy horror, no more exciting than an episode of Ghost Hunters pic.twitter.com/rP84tXVi5Y