With the lack of modern genuine gothic literature making it to the big screen, Crimson Peak had a lot to make up for, however despite it’s well crafted story, delicious cast amongst opulent sets, I wasn’t blown away by this epic ghost story. There’s a massive divide between Guillermo Del Toro’s Spanish and American work. Crimson Peak battles with its style and substance, for the most part it will wow it’s audience with an oil slick blend of colours but it seems to pluck the worse elements of gothic literature to mix but remains true and doesn’t step a foot out of the box.

Guillermo Del Toro’s typical mystical storytelling is smothered by the confines of it’s olde themed tale, his only way to press his expression into the mix of emotional entertainment, was through the gross ghosts into the shadowy corners and really max out the lavish Victorian world that his hard done by characters live in. One of the few movies that GDL doesn’t attempt to slaughter a kid in, it does follow the coming of age on a young woman, the daughter of a prestigious family, she hides her ability to see the dead, in her small town home the only ghost she usually interacts with is the specter of her late mother, but after meeting a charming stranger and his overbearing sister she finds herself alone and soon moving to Aderdale Hall, their half collapsing mansion and finally discovers the warning from her mother and the deadly dangers of Crimson Peak.

Wasikowska creates a wonderfully heroine, with her perfect porcelain feature and pale complexion really suits the era and her adaptability levels up, however while she looks like a luxurious Rosette painted beauty the brother and sister who steal her from her comfortable life are obviously evil due, we know this from their wry smiles and gothic dark personas which arr forceable harsh and are a little over the top making Hiddleton and Chastaine look more like Disney villains. In different hands Hiddleton could strive to be the next Vincent Price, but he still seems like an understudy, but there’s potential here and he’ should definitely make more horror screenings. 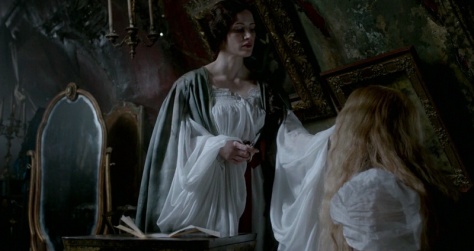 The use of colours is key in enjoying the movie Guillermo Del Toro has been vocal in his influence of the cult classic director Mario Bava who’s brightly coloured Giallo films are a Technicolor slasherific dream to behold. The hues and saturations signal what’s about to happen and change with the moods of the cast both alive and dead, it’s a clever addition to a film which is already brimming with visual delights, but does not detract from the fact that the film just isn’t scary, there are a few moments where ghostly figures (always appearing in a sickly bright red) will creep and might have caused a stir but in the big scheme of GOD’s work this hard scratches the surface of the fear he can easily generate. His sentimental troubled ghosts in Devil’s Backbone (2001) give more rights than all of Crimson Peak but remains a film which is watchable to more audiences due to the gorgeous faces and pretty sets. 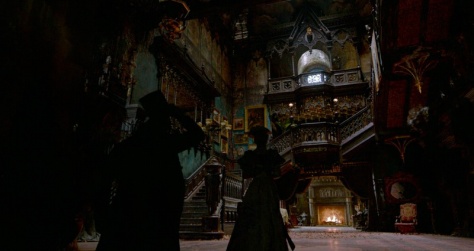 Stripping the elaborate world away there’s a distinctive lack of narrative that begins to flounder in its textured universe. So much of what we see is pleasant but it’s just lacking the depth of a gothic story, the complexity of Guillermo Del Toro’s brand of storytelling which is such a disappointment considering his track record, time to hope that he completes another Spanish piece soon as he needs to bounce back and knock this style of filmmaking right out of the park.

Crimson Peak (2017) Guillermo Del Toro's lavish gothic horror with a deep romantic vein as a young orphaned woman discovers a new love while receiving messages from the dead. Opulent visual delight with a curated story however fails to scare. pic.twitter.com/54O6WG41lP