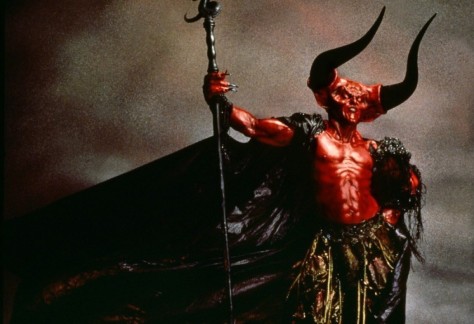 Cult classic gothic fantasy that inspired a generation. Tim plays Darkness, often mistaken for the Devil, but it’s easily done as he’s a giant red goat lord with a wicked sense of humor and a taste for the macabre. Ridley Scott’s all encompassing diverse fantasy world is stunning and set to a backdrop of slow motion falling snow and a Tangerine Dream OST. Tim brings his sly stylish character to his devil like character, through camera trickery his larger than life presence is topped up with a really sinister persona and those lovely lips! Ridley picked Tim for the role after seeing him in Rocky Horror Picture and encouraged him to bring out a bit of Dr Frank -N-Furter in this role, Richard O’Brien was even considered for the role of Meg Mucklebones.

Those 5+ hours a day to get ready we’re really worth it even though Tim felt claustrophobic he managed to shake that all off to preform, however there was a particular scene when it got too much and Tim managed to pull off some of his own skin while desperately trying to escape from the layers of makeup 😦 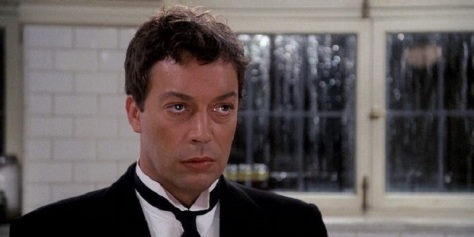 If Cluedo wasn’t enough you can always get a cheap thrill from Clue, a live action version of the funniest most outrageous game of Clue you could ever have. Tim plays Wadsworth, the butler and host of a night of murder and sleuthing. His role works as a narrator and holds the entire movie together. Despite its start studded cast that are adept at their craft it is just such a pivotal role that directs the movie, Clue is only as funny as Tim curry and his delightfully evil and playful until one of it’s many endings.

Tim is quite vocal about this being his favourite role and it certainly does look like he is really involved and loving running around trying to help his guests stay alive. For me the “I’m not shouting scene” is just comedy genius, no matter how tacky it might seem. 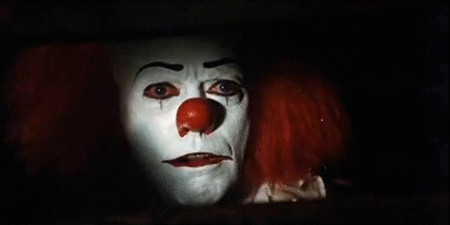 Probably the most well known role for Tim Curry is the demonic creature known as Pennywise. Smeared in clown paint and wielding a sinister red balloon, his performance as Pennywise is still discussed as being the best even after an impressive (or at least expensive) remake of Stephen King’s IT. He dances and entices children to their demise with a painted on smile and sick sense of humor, this role really was made for him and he really put himself into character to the point where the crew avoided him as he genuinely creeped them out. I think he was just overjoyed not to have to wear as much makeup as his Darkness character and was able to jump for joy!

I was extremely vexed when someone said Harry Potter was the first book/show about children going to wizard school when I grew up reading about Mildred Hubble and her trails and Witch school. In this 80’s movie length story starring Fairuza Balk he plays the Grand Wizard who turns up for a special event, sings a song and gives Mildren the encouragement to save the day.

The film didn’t age well but it was really something back in the day for the 5 year old me at least.