You’ve probably heard about this being the best film of the decade, of 2019, the most arresting modern movie ever made, a total game changer and a host of other praises, along with a list of wins and nominations in various film festivals but what’s all the craic about? Simply put it’s a movie about the gentrification of a seaside town filmed by a vintage hand-cranked Bolex camera using 16mm monochromatic hand processed film. This labor of love is a total game changer in the aesthetic of this blistering movie.

On the surface it’s a film about a fisherman without a boat struggling each day to raise funds to buy a boat he does what he can to go out and catch fish for a local pub/restaurant, himself and his neighbours. But his tranquil life is slowly becoming a mess when he begins to clash with the “new” people moving into his cosy homelands, local cottages are being brought as second homes by the citie elite who don’t like being woken up early by tradesmen and start to dictate who can park where and when and this friction starts to become a sour battle between our hero Martin Ward (Rowe) and the out of town family who brought his harbourfront “Skippers Cottage” for their seasonal holiday short term rental business.

For me the film is really precise and adorable, not only is it so perfect for it’s tone, setting and themes, if this film was about any other industry then I don’t believe it would work, if it were set in any other town I don’t think it would have worked, With Jenkin’s own local knowledge having been a cornishman all his life this is something probably very personal to him, and this comes across in the sensitive and thoughtful cutscenes showing the best character filled shots and having to hand crank the camera through each scene he has that extra personal touch for each second of the film. 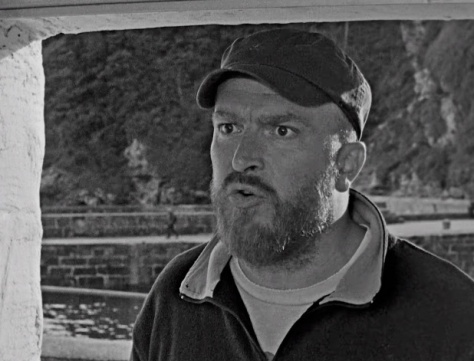 Martin and his brother Steven live in a modest home, each day Martin goes out to mend nets and fish by hand, each of the other local fishermen shout encouragement and ideas at him, everyone’s dialect is so raw and strong that even the locals don’t always understand each other! Some of the lines are delivered in a way it looks like a dubbed movie with bad lip synching.

For me, Bait feels like a modern Guy Maddin movie, somewhere in the mix of monochromatic grainy shots, undersized takes and the surreal idea of a boatless fisherman. I can see tiny aspects of Maddin in the madness. There’s no denying how this home developed movie really bears the fingerprint and DNA of its creator, and in a sense of art it’s really an outstanding piece and what is cinema if not moving art.

No bad words can be used to describe Jenkin’s deviation to this movie, and while I’m in awe of his fresh film, it easily stands out amongst a majority of movies released recently; is it really the most impressive? For me it’s a invigorating piece of passion art cinema, it will always stick in my mind but I feel the hype is over my head or maybe I just need to watch it again?

Bait (2019) A local fisherman struggles without a boat and has to face down against the gentrification of his beloved hometown. Mark Jenkins's work of art filmed on a hand cranked vintage camera is bursting the character and unique aesthetics. pic.twitter.com/k1SqZIn4Ln