Here we go again, the scariest found footage horror of all time!? Where have I heard that before?!!maybe with every new found footage release? It’s almost one of the tropes of the genres now, but it’s an intriguing selling point but after it’s got bums on seats out only opens the film up for ridicule later on.

What could be so frightening about a technical malfunction at a haunted house attraction? Surely it’s only a nightmare for the health inspector, but after watching the recovered footage you might want to call a priest. The film opens with a short video of one of the partygoers, lining up for the fright of their lives, by the time they get into the thick of it, the place is on fire and people are screaming to get out, but out in the car park the film carries on and it just feels wrong, there’s something else going on in there, a few horror fans will see the similarities in the V\H\S (2012) segment “10\31\98” when a group of friends in fancy dress head to a Halloween party at a friends house and run a gauntlet of paranormal phenomena.. this is like that segment but high on meth.

Kicking off five years after this terrible event at the haunted house leaving 15 dead, with only hearsay stories and limited filmed footage a research team get in touch with the last survivor, who is now “at peace” and willing to talk, after her incredibly nervous interview she leaves the team with a goldmine, a bag of recordings and ladies and gentlemen we have our found footage material and the fun begins. 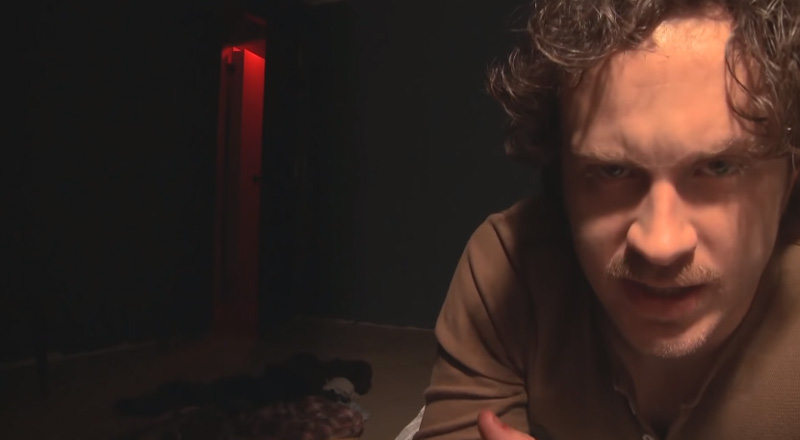 With a meticulous eye Stephen Cognetti creates an engaging story with a slew of sub genres with the charismatic “found” look. The team have to deal with a lot of demonic interference and general spookiness as they go about the documentation of the otherwise mundane setting up of a haunted house attraction. At first it’s mild strangeness, things which can be easily explained as pranks or in one case a bit of sleepwalking but slowly grows into events that need to be challenged and ultimately feared, the only loose clue it’s that the house has a dark history, but every town has that one special property.. 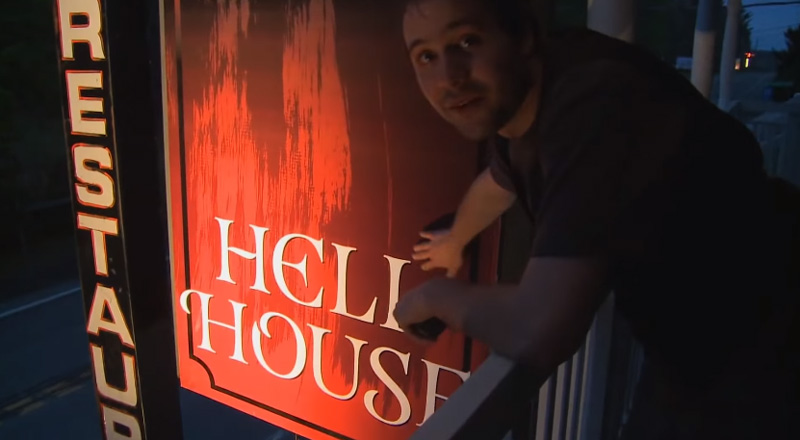 It feels a little lame at times, nothing more than the average found footage flick, but there is a constant presence of dread in each video update by the crew, but all of the interesting oddities going on they are each ignored so the movie can go on. The shenanigans involve acts like, someone moves a life size clown dummy and seconds later it’s facing another way, but unlike Annabelle (2014), these huge demented looking clown figures just can’t be laughed off so easily, I’m sure even Pennywise would give this guy a wide birth. But waking up with a man-size clown prop sitting next to the bed in the dark is bound to mess up anyone’s night.

With so much going on behind the scenes and all of the subtle scares there’s a generous amount, to get under your skin in Hell House, and the only real letdown it’s a dismal screenplay and underworked characters, it seems the point is to just focus on the mysterious encounters which do keep you watching for more clues as to what’s really going on in the house, but with the layered story you may be scratching your head wanting to view it again at the end as that’s when it all starts to click together.

The concept is sound, taking a setting which is already creepy and then blurring the lines is a masterful way to mess with your audience’s head, not really allowing them to properly discredit what’s going on and then the safety net is pulled for the end. Easy to see why, despite any shortcomings this has thrilled fans and curated quite a cult fan base and many sequels, the amount of curios for steely eyed fans is outstanding and Hell House will no doubt live on for some time.

Hell House LLC (2015) 5 years after a terrible event at a haunted house attraction a team of investigators have a rare chance to view the footage running up to the event in a much loved found footage horror that gets under the skin with genuine terrifying creeps pic.twitter.com/q6EZPfc5lb