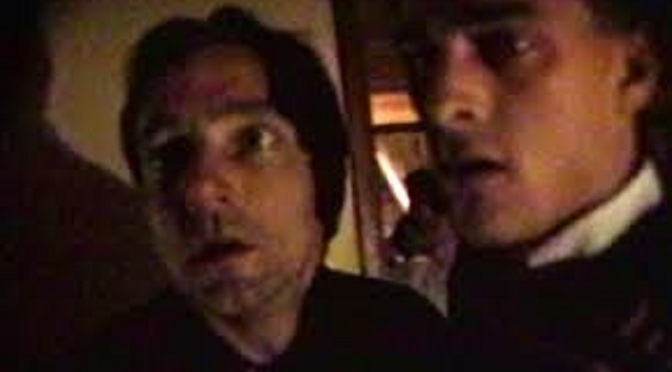 Largely forgotten, The McPherson Tapes film is an often overlooked early found footage sci fi movie. It’s something that you’ll find among those creepy compilation videos on YouTube, as the kids don’t have recollection of the movie or it’s creepy impact, often citing it as real found footage. If only they had seen the movie they really wouldn’t be any doubts.. But in all fairness the movie was once presented on a 1990’s paranormal investigation show as real footage, so I guess we can’t just blame the kids as the entire history of the movie has been plagued with claims of authenticity. But what makes it so realistic, that even the professionals can’t set it’s a work of fiction?

Initially my first thoughts of the movie is that it’s just not that great, what starts out as a family getting together to celebrate the birthday a five year old turns into a nightmare when some unwanted visitors turn up, with lots of panic and shaky cam in their dark cabinesque home, it’s not as exciting as it seems on paper, but you cannot fault that it does indeed look so real, but looking deeper it’s a quite a intensive, stark insight into American paranoia of an invasion be in earthly or otherwise.

For a lot of the movie the family are just happy to see each other and are really kicking back and enjoying time together in their remote location, out in the idyllic forest, but the turning point is gradual breakdown around them, no neighbours, not much natural light and no way of calling for help, things kick off is when they notice lights in the sky and the elder boys follow into the woods discovering an alien craft.

So much of the McPherson Tapes hinges on what could happen next, with the family being totally isolated and out of their depths and with two vulnerable people who they try to shield, grandma and the adorable 5 year old who’s just trying to enjoy her birthday. It raises questions, after all who knows what to do when aliens come knocking? Generally there’s a warning, from random monoliths or maybe something sensational like Signs (2002) where three worlds are watching and thus giving people time to prep. But in the vein of Robert Lieberman’s Fire in the sky (1993) this covert contact is chilling, accidentally stumbling on an alien craft with only a shotgun back at home, not many of us would fancy our chances, but the family are brave and manage to bag an alien, which is pretty awesome but are they prepared for the consequences?

Using the found footage filming technique for this slightly zany sci fi horror is really interesting, there’s a valid reason to have a camera, and as the terror grows, the reason to keep filming is paramount, you wouldn’t want to miss a moment and as the movie plays or so quickly it’s all quite enjoyable in real time. The lavish history of the movie being believed as real footage comes from a series of unfortunate events. The original movie was destroyed in a horrific fire leaving only video copies, at this stage a bootleg copy was circulating without a cover, intro or credits and that’s how this was believed to be a real found film. If you’re into Found Footage and want a full picture of the impressive history of the genre then this cannot be missed but, for me at least it just isn’t something I’d want to watch again.