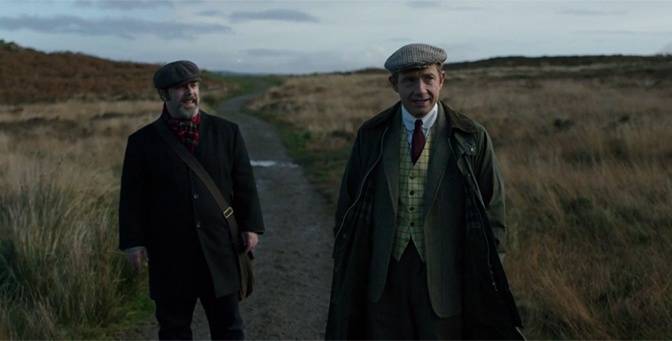 I often find new ways to really gush over my favourite films, sometimes re watching them so many times I begin to notice those little things which no one really does I also like to talk about unique scenes (sometimes in great details) and while I don’t want my review to have spoilers there’s still a deep need to talk about aspects of the movies which entertain and inspire me and this is just another way for me to do just that. Please note this post like all the others will contain massive spoilers..

I adore the supernatural but I have deplore those charlatans and cold readers who take advantage of vulnerable people. The scene at the beginning of the movie re-creates the real life outing of fraud Peter Poppoff who would collect data on the people who would go to him for help and have it read back to him over a headset while pretending to connect them with their loved ones. Amen to people like James Randi and Darren Brown who take a more skeptical look at this stage fraud. And while I want to believe in the dead coming back to communicate I know it’s not going to happen as part of a cold reading act from someone who insists on having my details first.

Once you get to the end of the movie you can kind of appreciate that there is a cycle of events. The opening of the movie is a series of home videos showing that Goodmans father hated his daughter’s boyfriend, be it that the young man was outside of the religion or race we’ll neve know but the arguments caused a huge rift in the family. In the present day Goodman visits his father in a nursing home, a man in an almost vegetative state but Goodman has little pity for him. Later we see that Goodman is really the one in a comatose state going through his own personal hell constantly, what of his father, was he really in this waking dream or was it self projection?

In the breakdown of reality near the end of the film, Goodman is taken back to a point in his life where he was a school boy, a few bullies begin to taunt him but then someone further down the food chain turns up, a boy with a few learning difficulties but who’s friendly enough. The bullies send him into a tunnel, he has to find 10 numbers, he begins to read them back as he ventures into the darkness but he dies from a panic induced asthma attack. You get hints that Goodman has been there before as he knew there was no 10th number but he didn’t warn of helping the defensive boy. But during this scene Goodman keeps morphing between a younger and older self, as a man in school uniform etc those subtle changes really spice up an already thriving scene that changes the entire movie.

Apparently these posters were released for April 1st, but I can’t verify, I remember the initial poster campaign was really vibrant showing a crazy psychotropic nightmare for each character. On top of these character studies there was a range of posters with a different tagline “The Brain only sees what it wants to see” along with this there were a handful of errors and typos which were a challenge for perspective audiences but it didn’t seem to work.

This movie has a Magic Hour, all the clocks in the movie are set to 3.45 I assume this is the time when Goodman attempted suicide. But I did wonder if this was some random bible quote but I couldn’t really find anything that matched the sentiment of the film.

There’s a lot of numerology going on within the film, between the clocks and crazy games, there is a real countdown going on, at the beginning of the film in the pub there is a sign on the noticeboard which reads 10th Number, and then the random house numbers etc carry on until… I’m not actually going to tell you where everything is, that’s for you to re-watch and work out.. oh go on it’s a great movie enjoy it one more time.

In the first case which follows Tony Matthews who is a nightwatchman being haunted by the ghost of a young girl, he spends his night talking to his friend on the radio. It’s really odd that this person is never shown talking back and remains just a voice, but if you listen to what he says he drops huge hints as to what’s happening. Tony lost his wife to cancer and stopped visiting his daughter who suffers from Locked in Syndrome. The guy suggests a few things which are a direct message to Goodman.

“It’s funny isn’t it, How it’s always the last key that unlocks everything”.

The Satyr/Devilish creature in the woods is known as Woolly and was played by Paul Warren who’s more famous for his work in Star Wars.

Each segment has some creepy voice in it’s reveal. The little girl’s ghost, the breath and noises with the dead baby story etc, but each is from the sounds in the hospital. In each case the voice doesn’t even have to say anything, for example the poltergeist haunting Mr Priddle it just makes a pfft noise but it’s just really interesting how sound and voices are used in each segment in quite a significant way.

In the story with Simon Rifkin, Goodman enters the boys home and sees another young boy on his way to Simon’s attic room, he asks Simon who the boy is and he says there’s no one there. Wait what? Who did Goodman see? Is he talking with Simon or a Demon, did he see Simon or a Demon on the way to the room?

Everything about Ghost Stories is all about perception. The April posters and televised adverts are all littered with spelling errors and ask for people to look beyond the veil and find the truth, stop believing in everything at face value and that’s the key to the frights in Ghost Stories, it really is something you have to watch more than once. The big reveal at the end is really impressive, you’re presented with a downdown throughout the movie then Martin Freeman’s character as Mr priddle morphs several times, from a banker to a devilish character who forces Goodman to realise that he isn’t so innocent as he had a part in the death of a school friend. Then there is another big reveal, the biggest of the movie, it turns out that Priddle is really a Senior Doctor looking after Goodman in hospital. This mind blowing explanation to the truth takes the performance from movie to stage play which is how the story was first born. It’s quite majestic in the transition and after everything that happens really ends the film with a kick to the stomach, at least for poor Goodman.

Not a lot to say here, but the quick brutality of Mike Priddles suicide is outstanding, not something I’d expect from a British Ghost story, but something more attuned to to Final Destination. 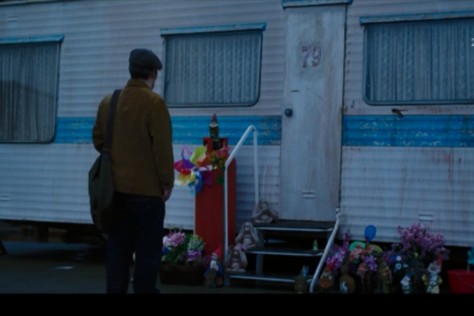 Everything about the caravan is spot on, it looks like a wreck in the deepest darkest corner of Jaywick from the outside, a run down little caravan (No. 79) and it’s aesthetics are so tight. From the little kitchen trinkets that are outside to the run down interior it just screams end of the line. When the movie begins to shift into the next gear there is another impressive scene where it breaks apart when Mr Priddle takes on his more devilish persona after masquerading as the impoverished Charles Cameron. It feels like a portal more than a home.

Just an unusual scene, it’s the first time that Goodman actually sees a ghost and it just happens to be him. It’s not enough proof for him that they exist..

It’s not really the first movie that comes to mind for challenging or highlighting racism but there is a big slice of it within Ghost Stories. Goodman comes from a strict Jewish family and his father throws his sister out for dating a South Asian man. Any parent might become unhappy for his daughter dating anyone but this seems based purely on race. It feels as if the movie skirts over this quite quickly to focus on the fact that later in life the father spends his time in a vegetative state, which seems to happen a lot to everyone within this story but Goodman often visits his father and wonders what hell or peace he’d finding within his Locked in Syndrome.

When the film opens and reveals that Goodman is a man who spends his life debunking fraudulent psychics, I immediately think of Darren Brown. But after rewatching it seems more like the events surrounding the brilliant James Randi when he uncovers the underhanded methods of Televangelist Peter Popoff who used to scam his followers by having people fill out prayer request cards before events. Randi intercepted the radio signals from Popoff’s wife, feeding him information from the cards, into his hidden earpiece.

As Simon Rifkin was such a demonologist before his encounter with Woolly or the Devil in the woods his bedroom is pasted with demonic art and what a mood that craetes, it’s like a Tumblr page that’s probably called Fuck Yeah Satan.

For a movie with lots of mention of babies there aren’t any in the movie, it seems as if the presence of children are a reminder of rebirth and pure symbology.

This won’t come as a shock to regular readers but my ultimate moment in a movie which is crammed with brilliant symbology and damned near perfect storytelling and I’m all caught up in the fact that the Devil gets smacked by a car! What the fuck was he doing out in the woods so totally unaware of an oncoming car? The scene is utterly terrifying and leads to one of the scariest moments. After TAking the Devil also known as Woolly the poor kid gets out the car, realising that what he’s run over isn’t human and quickly tries to escape. Woolly gets in the back of the car and asks him to stay to which Simon replies Fuck That! and runs for his life. It’s these little moments of comedy that really make life so much better.